For many of you the phrase “I am a Football mom” may not seem like a big deal. But readers, let me tell you, it’s something I never thought I would say!

Growing up, sports were not in any way a part of my life. I never participated in an organized sport and other than my big sis’ brief venture on the soccer field none of my three siblings did either. Every once in a while I would notice murmurings about a certain team called The Packers but it never really meant anything to me. Attending a game with a friend and watching Brett Favre and Mark Chmura play was fun and all, but not the highlight of the year or anything. 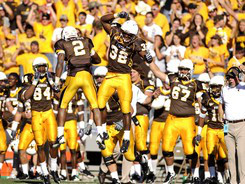 When I began attending the University of Wyoming I soon learned that going to the UW football games was what everyone did on the weekends. I was all about it! Yelling, cheering, drunk cowboys, hot cocoa, cute football players (at least until I met The Cowboy), and parties long into the next morning. Even then it was all about the social aspect not the actual sport.

As the years went on I began to get a bit more active but in “loner sports” like running and yoga.

The Cowboy while into sports himself as a kid, wasn’t one to devote hours to watching sports on TV.

As the Cowkids got older they asked to do activities and I totally supported them (within reason) cheering on flag football and handling hours of ballet practice and recitals. I admit I spent most of the flag football years either nursing a baby or, hugely pregnant trying to keep an 18m old off the field.

This year though, we entered into the world of middle school midget football.

I was more than a bit nervous between it being a new school, and a whole new realm of practice and games. We went from a three night a week commitment to five nights, and one night a week the challenge of being in two towns at the same time (one has ballet and one has football).

Thanks to Mary Poppins I was able to attend Cowboy J’s first week of practice without the other Cowkids distracting me. It was my first time ever attending a “real” practice and frankly it was fascinating. I could immediately see why everyone talks about the benefits of sports. The kids were quiet and all ears as they listened to the coach. They cheered each other on and worked together to do what was asked of them. They pushed hard when they were tired and dealt with defeat and failure gracefully, with an “I’ll get it next time attitude.” 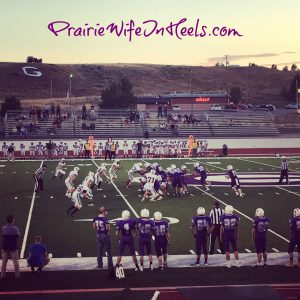 At the end of the first week I could see how the boys were growing in strength both emotionally and physically and I took the coach’s advice and drug the whole family to the Varsity High School Football Game. CollegeBFF is from the small town where we now live, and is also an avid sports fan. She couldn’t believe it when I invited her and her daughter to attend the game with us…because really…who would have thought?

It was an absolute blast. Not only was it hilarious to see Mary Poppins’ excitement over the “Americanness” of the evening (hot dogs and coke, quarterbacks, bleachers and a band) but it was heartwarming to see so many familiar faces and families cheering and rooting for the local team. All the Cowkids had a blast and we made it through almost all of the game. Two neighbor kiddos hitched a ride home with us and hung out for a bit afterwards laughing and messing around. 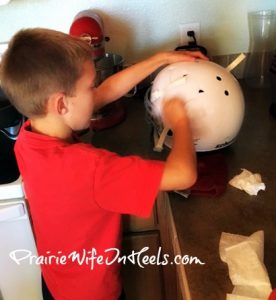 I am a Football mom.

What do you think, have you seen sports have a positive effect on your family?

2 thoughts on "I am a Football Mom"