Origins of a Prairie Wife Part 3 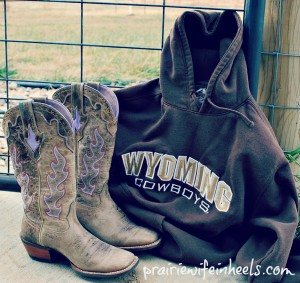 I loved college. My experiences at the University of Wyoming were probably pretty typical. I enjoyed school and had a good group of friends to spend time with. That girl I met as I leaned out my window, she became one of my closet friends (CollegeBFF). I of course had my fare share of broken hearts, and all nighters, and probably more than my share of tragedy …but that’s all part of growing up and learning about life on your own.

My sophomore year at UW, CollegeBFF and I moved into an apartment together, where we would live for the next two years.  I took a job working 60 hours a week, graveyard shift, at a gas station across the street from our apartment. I also had a full class load of 21 credit hours…I would go days without sleeping, and barely changed out of my Wyoming sweats and hoodies. I now know I was simply practicing for motherhood!

Despite my full work and school load, I made it to almost all of my classes, and nearly pulled off a 4.0. I recall an incident during a class I shared with CollegeBFF. I was sitting there minding my own business listening to the professor lecture about Native Americans when she poked me in the side. “Hey, you keep falling asleep, you better stop!” I looked at her indigently, “I am not!” She calmly pointed to my notebook where she had written several times, YOU ARE ASLEEP. I guess I should have had an extra Diet Pepsi that morning.

Towards the end of my sophomore year I met a fun group of cowboys. They were innocent enough, always ready for a good time and a good drink. It was the easy kind of fun where no one had to be worried about getting hurt (too badly) and you knew you were safe. Because I was still 19, I never drank (really I didn’t drink until I was 21, you can ask College BFF) and I just went along for the ride.

Summer was soon upon us, and I stayed in Laramie to work and make some money so that I could hopefully purchase a car in the future. I had received a full ride scholarship (see hard work does pay off) but I still needed to work for living expenses. Summer in Laramie is beautiful, but almost half the population leaves for places unknown, so it can be a little quiet.

My cowboy buddies kept on talking about “Frontier Days” and how it was the best thing about staying in Wyoming for the summer. Apparently it was the world’s largest outdoor rodeo “The Daddy of Them All” and it offered concerts, a daily rodeo, a carnival, and a beer tent with dancing and of course…beer. I was game; I hadn’t been to a rodeo since Cody, and it sounded like a good time. I took some of my hard earned cash and bought my first pair of Wranglers (skin tight of course) and a cowboy hat. Keep in mind I also had one of the most unfortunate haircuts ever, it is best described as a bowl cut.

We headed over the summit to Cheyenne, Wyoming. It seemed like a metropolis compared to Laramie (a population of almost 50,000 to Laramie’s 25,000) which is ironic considering I grew up in a town of over half a million people. I couldn’t even tell you the concert we went to, but I can tell you it was full of drunken cowboys! My buddies met up with people they knew from all over the state, and I spent hours dancing and singing along with the group. After the concert it was time to head to the beer tent. I won’t bore you with the details of how a 19 year old girl, who actually looked like an 11 year old boy (remember the haircut?) got in, but I managed.

There was more beer and whiskey and even more cowboys. We met up with a particularly intoxicated friend of theirs who was more 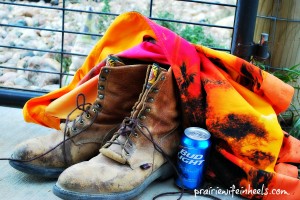 than happy to dance with me. Apparently he worked road construction, and it was his first weekend off in over 6 weeks. He wore a hideous neon orange Hawaiian shirt, his green eyes sparkled, and everyone there seemed to know him. We ended up piling him into the truck with us, and heading out to the local bar in town. I hopped the fence at the bar and met up with the guys, and we stayed until closing time. Before we headed back to Laramie we had to take our green eyed friend back home. I sat in the middle of my buddy and his friend, singing along with the radio, thinking how truly fun my life was. We pulled up to a small house; once we determined it was indeed where his grandma lived, I gave him a hug and opened up his door.

The green eyed cowboy looked at me as he stumbled out of the truck and simply said, “I could marry a girl like you.”

Read more of the story in Origins of a Prairie Wife: Part 4

2 thoughts on "Origins of a Prairie Wife Part 3"