Origins of a Prairie Wife Part 4

Being young, full of energy and more than a little foolish, my buddies and I headed back to Frontier Days the following evening. This time I brought along a few of my girlfriends. I was hoping that the green eyed cowboy would be back, but I didn’t want to ask anyone, that would not have been cool. We decided to skip the concert and head right to the beer tent. My girlfriends and I immediately hit the dance floor. As we danced, I was of course scanning the tent looking for the green eyed cowboy…Suddenly I saw him. Calmly standing off to the side, drinking a Mountain Dew, and staring right at us! It was all the invitation I needed. I ran over to him and gave him a big hug and hauled him onto the dance floor.

Now, because you are hearing this story many years later, you get a little inside knowledge that I didn’t have at the time. I truly didn’t find out this little tidbit until several years later. It turns out the reason he was standing off to the side and watching us, is that he wasn’t sure which girl was the one he had met the night before (I don’t think I need to explain why his memory was a little foggy).

The night went on and we all decided to head into town for some food from a local 24 hour restaurant. In the course of the evening The Cowboy asked me if I wanted to go to an Aerosmith concert in two days. I was SO excited and of course I answered yes. I also need to add, at the insistence of The Cowboy, that he took for a ride on a Harley that night as well. Apparently this makes him super cool!

Monday rolled around, and The Cowboy stopped by my place in Laramie to pick me up. CollegeBFF was there and to say she wasn’t too thrilled with him would be an understatement. I was dressed as any 19 year old girl would for an Aerosmith concert; booty shorts and a tight tank top. We headed over the summit to pick up The Cowboy’s buddies in Cheyenne. As we entered town he said, 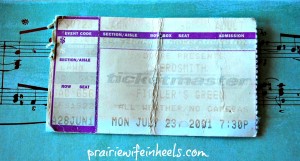 Grandma’s house and I took a deep breath, ready to meet my fate.

We walked in the door and I put on my sweetest smile and pretended that I was dressed modestly and appropriately. She was amazingly kind, and so were his sister and brother-in-law, who also went to the concert (surprise). Apparently I met with approval because we then headed to Denver for our big night out. The concert was great and an amazing time was had by all.

Before The Cowboy could drop me off in Laramie we had to stop and trade cars in Cheyenne. His friend “Little Buddy” was driving us out to The Cowboys truck (a semi truck) when his attention was captured by a massive puddle. This is very unusual in Wyoming, and he decided it would be a good idea to drive his two door Subaru hatchback, through it. The Cowboy tried to convince him not to do it, but to no avail. Little Buddy drove at top speed right for the puddle. We made it about 30 feet before the car gurgled to a stop and promptly sunk. Water came pouring into the car up to the seats and The Cowboy’s face was filled with a rage I have only seen twice since. Little Buddy bailed out of the car and started running the 2 miles to his parents place to get a truck and tow rope. I will never forget, standing dripping wet at 2am, shivering and watching them dive under the car to try and hook up the rope. There were a few more mishaps but we eventually got the car out. It wouldn’t start then, but after it dried out it worked just fine, those Subaru’s are tough.

The Cowboy and I finally made it to the Peterbilt, where I changed into and old t-shirt and shorts of his. Where were they when I was about to meet Grandma?! We headed down the road to Laramie. I was exhausted and a little tense and The Cowboy’s blood pressure was still elevated from Little Buddies contribution to the evening. All in all it wasn’t that bad of a night, but I couldn’t’ help but wonder if I would ever hear from him again.

Read more of the story in Origins of a Prairie Wife: Part 5

One thought on "Origins of a Prairie Wife Part 4"