In early February, America celebrated the 50th Super Bowl. Our “local” team, the Denver Broncos, won it and so folks were keyed in and keyed up around here.

The tiny parish held a fundraiser, selling deli trays that were delivered on the afternoon of the Super Bowl. Parishioners raised thousands of dollars for the parish general fund with that obviously football-related effort.

It is not uncommon to see bright orange jerseys at Mass on Sundays in the fall. This past Sunday, knowing the window would be tight between the end of Mass and the kickoff of my beloved Packers, I wore my T-shirt that reads, “I’m a [buckin’ horse] on Saturday and a [cheesehead] on Sunday.”

I absolutely love the shirt. So imagine my shock, and then anger, as the priest railed against the evils of football for the entirety of his homily.

Wedged into the end of the pew, I was forced to stay until after Communion.

The only other time I’ve left because of a homily was years ago, when we were sternly lectured that you could not be a Catholic and be for the death penalty.

So  here are the things I wish the priest knew: 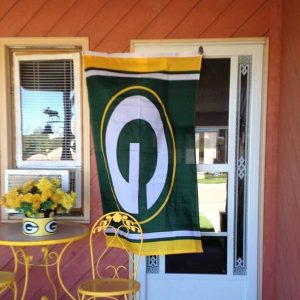 Of all of the people at that Mass, I am certain that I am the only one whose family survived because of football directly for 45 years. And for the 17 years since, football has directly provided a comfortable life for Peggy Jane the Mom, and in turn absolutely for her offspring and their families.

I go to Mass to feel grateful and be uplifted, not to be punished.

One of the priest’s points was that we close ourselves off alone with our expensive TV’s and channel selections during football season when we are supposed to be community.

Before the Packers were victorious, we left for a party in the same community in which I reside. It was a retirement party for a longtime resident. There were people there of all demographics and professions.

They all were talking football — all of them.

In 60 years, three Masses stand out, and I’d love to share details with you. I’m certain that you’ll find a common theme.

In late January 1997, we were at the Super Bowl in New Orleans. We found a Mass in an ancient church in the French Quarter. There were hardly any people there early on Super Bowl Sunday, and the priest breezed through in 31 minutes.

My son, weeks away from being 13, was so impressed that he wrote a guest column for the state’s largest newspaper about the Super Bowl experience, and that 31-minute Mass “with no music” was a highlight of his report.

In early September 1999, three bishops and six priests gathered in downtown Green Bay to bid farewell to my beloved father. He had wanted his Mass of Resurrection at the country church just a couple of minutes from their lakeside home, but the current Bishop and two retired Bishops wouldn’t hear of it.

Included in the priest lineup were the Packers’ current team priest and former team priest. Yes, nearly all big-time college and NFL teams have their own priest. Imagine that.

And finally, just a couple of years ago, we were in Denver for my cousin Pat’s Cleveland Browns to take on the Broncos. Pat specifically invited me to Mass at the team hotel, where we also stayed, on Sunday morning. They are quick affairs, but serve the purpose.

Everyone participates and usually, a coach or player serves as both altar server and reader.

I have been Catholic since the day I was born. I intend to be Catholic on the day I die.

But I refuse to consider giving up any part of football because of one misguided, angry homily.