My whole life all I wanted to be was a mother. My childhood was spent playing with dolls and being “mommy”. At the age of 4 I  was an enlightened young girl and I knew I would also need a career; this was probably due to the influence of my very business oriented older sister Texas Two Steppin’. So, I picked being a teacher because this was as close to being a mom as any job and, would allow me to work while the kids attended school. I kid you not, this was my thought process at 4, I was very goal oriented and had the big picture in mind early on.

I attended the University of Wyoming and eventually met The Cowboy and got married. After a year of marriage we decided to 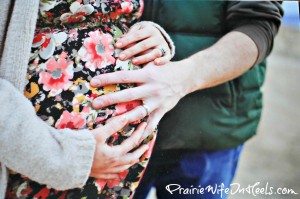 start a family and in March of 2006 Cowboy J was born. I was completely overwhelmed and overjoyed at the same time but, charged forward on my journey of motherhood. The Cowboy was so excited to have a son to show off that we planned a trip up to Cody over Mother’s Day weekend to show him off to both relatives and family friends. By this time Cowboy J and I had nursing down. After all, with him eating every two and half hours since birth I had lots of practice! Add to that a major case of colic and you can imagine my mental state. But, being a new mom I had no idea the absolute suckiness of traveling with an infant and staying in a hotel.

After three days of a screaming baby and a tired and overwhelmed mother I was more than looking forward to a little bit of a Mother’s Day break. Frankly, I am sure my poor SisterInLaw1 was looking forward to a break from a high strung mother and baby too! I wasn’t expecting a big gift, we were way to poor for this, but I was hoping for a day lounging around. I was woken up by The Cowboy at 6 am with a soft kiss and an “I’ll be back later this afternoon.” In my tired weary haze the “this afternoon” didn’t register and I rolled over to get a few more minutes of sleep before the baby woke up. When I arose to the fussing of the baby and The Cowboy was not there to help or offer me breakfast while I nursed, I began to wonder what was going on.

Once the baby was calmed down I call The Cowboy’s phone and received the news that he was headed out with his Step Father to go fishing for the day and would be back a little after lunch. Notice there was no “Happy Mother’s Day my dear beloved wife”… I admit to putting the phone down and hysterically crying tears of sadness and self pity. My whole life I had wanted to be a Mother, and this was my first celebration of achieving my dream…and I was exhausted and overwhelmed with the not so much talked about terrible side of motherhood! I put Cowboy J in the sling and walked to a nearby gas station for food and pouted in the hotel room. Secretly hoping that The Cowboy still had something up his sleeve.

When 1:00 rolled around with no sign of The Cowboy my sadness turned into a white hot rage at being completely abandon for a day of fishing…I finally fell asleep at 2:30 only to be woken up at around 4 by The Cowboy saying my name softly. He gave me a kiss and a big smile and handed me a card while saying “Happy Mother’s Day!” As the baby stirred in the crib I opened up the envelope that was obviously bulging, hoping that it was sweet and had a long handwritten note…maybe a gift card even to save the day. No such luck…

It was a cheesy cartoon card and in it was two buttons. Yup buttons, like you would pin on your acid wash jean jacket if you were 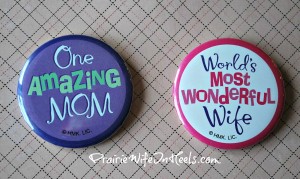 alive in 1985…It was clearly bought only moments ago, at the same gas station I had previously purchased my Mother’s Day breakfast and lunch! The Cowboy even had the intelligence to look slightly embarrassed. The truth is, I acted thankful and kept the rage and tears inside. I was so upset I couldn’t even begin to verbalize my feelings rationally for months. When we finally had a conversation I explained that it was the lack of thought, not money spent that made it painful…

Husbands, we know that we made the decisions to be mothers, and most of us love our job. But, the truth is that changing diapers, rocking cranky Cowkids, making countless meals, and worrying endlessly about everything is a tough gig. We just ask on one day a year, you tell us how frickin’ amazing we are to keep everything all together and lavish us with love and praise about our ability to be the most amazing wife and mother ever! Do NOT do what The Cowboy did! Write a note, have the kids do an incredibly cheesy art project, buy a terrible gaudy necklace, make us dinner (and CLEAN IT UP AFTERWARDS)…just put a little thought into whatever you do.

Husbands: For extra hints on great gifts take a look at our Pinterest Board (Prairie Wife Add Ons is a great one to start on)

What was your best or worst Mother’s Day ever?

8 thoughts on "My First Mother’s Day"