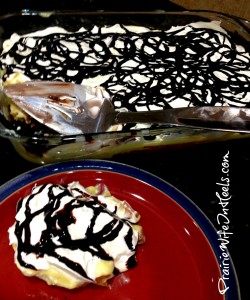 I must confess that I have unique taste in food, especially when it comes to dessert. For example, if you give me a choice between dessert and mashed potatoes, I will pick mashed potatoes every single time. I will pick a simple slice of apple pie (never a la mode) over any type of cake, and a plain slab of zucchini bread over anything chocolate. However, while I don’t like to eat sweet treats, I absolutely love to make them and always get rave reviews. A coworker gave me this recipe years ago; I had to have it after she got tons of compliments during an office potluck. I haven’t whipped it up in many, many years, but I think it is perfect for most Prairie Wives because it uses basic ingredients, incorporates a bit of chocolate, looks delicious and tastes better the day after it is made. Let me know what you think!

[Note: I wrote this introduction and then made the Éclair Dessert to make sure it was worthy of the blog and tasted as good as I remembered. OMG, it was so much better than I remembered. It seriously took all of my self-control to not go back for thirds (yes, you read that correctly, but I did share my first piece with The Texan). I was still thinking about it the next morning and treated myself to a big helping with my morning coffee (please don’t tell my family). Anyway, you really need to try this one. It truly is AHMAZING, and I don’t even like desserts!]

1 large box (5 oz.) instant vanilla pudding (I don’t use the sugar-free version because an éclair dessert should have a few calories)

8 oz. cream cheese (bring it to room temperature before you start Step 2)

12 oz. Cool Whip, thawed (I absolutely, positively prefer homemade whipped cream but if you are going for simplicity, this tastes great and won’t have separated by day two)

Chocolate syrup (If I’m going to do chocolate, I use the Hershey’s Special Dark)

Step 1: Bring water and butter to a boil in a large saucepan (the pan will act as your mixing bowl). Remove the pan from the heat, and beat the eggs into the mixture, one at a time, using a wire whisk. And when I say beat it, I meant beat it or else the eggs will “scramble.” Add the flour slowly while you are whisking and don’t stop until it is incorporated thoroughly. Pour the mixture into a lightly greased, glass 9×13 inch pan and bake it at 400 degrees for 30 minutes. Let the “crust” cool a bit before moving to Step 2.

Step 2: In another bowl, prepare the large box of pudding according to the directions, add the cream cheese, and beat the mixture until it is smooth. Pour the pudding mixture on top of the crust and top the pudding with Cool Whip or whipped cream. Refrigerate, and just before serving, drizzle chocolate syrup on top of the whip.