Origins of a Prairie Wife Part 1 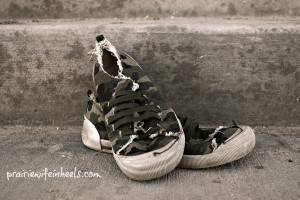 It all started a long time ago, back in the late 1900’s, before this Prairie Wife had even thought about wearing heels. Ma, Pa, Big Brother B, and I were all that was left living in the City Home. My older sister, Texas Two Steppin’, and my Big Brother T were already grown and out of the house. I had just entered my troublesome teenage years. It was a summer like most others; the weather was hot and humid, and the sun shone bright.

The only excitement was Pa’s family reunion. It was to be an epic journey across the United States that ended (we hoped) in Cody, Wyoming. When the departure day arrived, we loaded up our Astro Minivan and headed west across the Mississippi. Frankly, I don’t remember much about the first part of the drive. I don’t recall it being overly boring (and this was before the time of DVD players). Big Brother B and I had brought our Walkmans (for those of you that are too young to know, this is how we listened to music before ipods), and I recall listening to Nirvana as we drove across the South Dakota border.

This is where my memories take off. I was currently on a big Kevin Costner kick. I can still quote almost the entire movie Dances with Wolves by heart. Suddenly, as I looked out the window, I saw the vast grasslands that were filmed in the movie. I had never seen so much sky! The shades of brown and green were so beautiful. I was captivated! As we continued our drive we entered into the state of Wyoming. At first it was more of the same. Soon, the grasslands gave way to rolling prairie hills and finally, in the distance, I saw mountains.

I had never seen mountains before in my life. I saw beautiful shades of blue that slowly turned into deep greens and browns the closer we drove to them. A few hours later we began to climb up over the Big Horn Mountains. I was somewhat distracted by Ma’s reaction to the steep and curving mountain roads. I had never seen her so pale and nervous! If I didn’t know any better, I could have sworn I saw a mischievous glint in Pa’s eyes, as he took more than a few corners at high speeds. I was soon drawn back to the scenery out the window. Rusty red rock walls lined one side of the road, while steep grassy hills covered in yellow, white, purple, and crystal blue wild flowers sloped down on the other.

When we finally arrived in Cody, I was so excited! The week that followed was full of fresh air and Wyoming winds. My cousins and I ran through the prairie surrounding our hotel and spent hours looking at the stars at night. We saw a wolf cross the road in Yellowstone, and I went on my first horseback ride. It was an old horse who simply put his head down and followed his friends, but I felt like such an adventurer. I listened raptly to my Uncle John as he showed me how to hold the worn leather reins. I envisioned cowboys and Indians around every curve. Even the massive Wyoming thunderstorm that came rolling in brought me joy rather than terror. Watching the large black thundercloud descend upon us in mere minutes was thrilling. I had never felt wind so strong in my life, and as the cold raindrops soaked me I knew I had never felt more alive.

As all good things come to an end, so did our vacation. Hugs and kisses were given and we headed back to The City. I stayed awake long after dark, gazing out the windows. I stared at the rolling blackness of the western prairie, and knew a part of me had been left behind. When Ma and Pa asked me what my favorite part of the trip was, I responded, “Wyoming! I’m going to live there someday!” Ma and Pa laughed and shook their heads.

The story continues in Origins of a Prairie Wife: Part 2

4 thoughts on "Origins of a Prairie Wife Part 1"