This is one of my go-to desserts in the fall. “It only takes 2 seconds” yet tastes so good. My favorite part is the yummy topping so, I developed a recipe that puts that sweet crispy crust front and center. Top your warm Apple Extra Crispy Crisp (say that three times fast) with some homemade whipped cream or vanilla ice cream…mmmm tastes like fall! 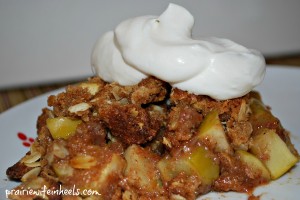 Combine all the ingredients in a bowl and let sit while you make the Extra Crispy Crisp.

Stir all the dry ingredients together in a second bowl, and then add the melted butter. Stir until it is all thoroughly combined.

Turn the oven to 400 degrees. Spray a 9×9 square glass dish with non-stick baking spray. Stir the apple filling one more time and then dump it into the dish. Spread it out evenly. Using your hands take the Extra Crispy Crisp topping and sprinkle it over the apple filling. Make sure you have it evenly spread all the way to the corners. Lightly press down the topping, there should be no gaps. Place it into the oven and set the timer for 25min. You Apple Extra Crispy Crisp will be done when the apples are bubbling and the topping is a dark golden brown.

Previous Post « How to Cover Up Under Eye Bags