A Whisper Is Like the Shadow of a Shout

“A Whisper Is Like the Shadow of a Shout”
This quote from self-published author Jarod Kintz really resonated with me when I read it. It totally captures the first step I took when I needed to discipline my stepchildren. Taking corrective action with “steps” is a tricky thing. You can’t be a total pushover, but you don’t want to be seen as “wicked” either. You want to respect the system of punishment that was used before you came onto the scene, but it might make you uncomfortable to try to repeat it yourself.

To help you understand this story, I need to give you a little bit of personal history. When I decided to move in with The Texan, I knew that I loved the kids just as much as I loved him. All three of them made my life complete. I planned to be there forever (we’re at 18 years and counting…). But I also realized that I was the new variable in the family equation and didn’t want to make things more complicated than they were already. Because The Texan and the kids’ mom were not fierce enemies, I had become friendly with her and was accepted as a member of the extended family after several months. Yes, I do realize that I had an exceptional situation!

But back to discipline. Even when you have permission to punish your stepchildren from your spouse and his/her “Ex,” I would suggest taking a light approach. I actually got this idea from The Texan after he mentioned that he always hated yelling at the kids. I thought back to my childhood, and while I was never yelled at (really!), I do remember feeling uncomfortable when stern words were directed at one of my siblings in a less than conversational volume.

So, I decided to try an experiment the next time I needed to get them to stop squabbling. While they are the best of friends now, 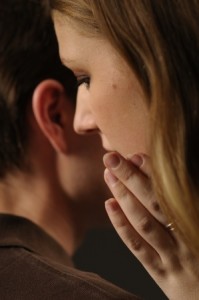 Step Girl and Step Boy are just 1 ½ years apart, very competitive, very confident and very opinionated. These are wonderful qualities in adults; difficult to manage in children. But I was determined to ban yelling from my new household. So, the next time I heard them yelling at each other in the living room, I went in, stood nearby and whispered, “Please stop.” The kids, who obviously had been considering whether or not they should get physical to prove their point to each other, stopped in their tracks, leaned closer to me and in unison said, “What?”

I calmly whispered again, “Please stop.” By that time they had moved away from each other and toward me, and the physical distance had a positive effect. They both mumbled sheepishly, “OK,” and went to play in separate rooms. I almost yelled with joy that my experiment worked, but then remembered that would defeat the whole point!

I used this technique over and over again, and for some reason the kids usually responded. Now, I must confess that in emergency situations, like when the river was flooded and the kids grabbed a canoe because they wanted to try to brave the raging waters, I did yell (to this day I still remember how scared I was; the kids claim they were just joking, but I’m not so sure). But 90% of the time I was able to discipline the steps using the “shadow of a shout.”