Note: I decided to include real pictures of my body in this post because I know that it will help to prepare other women as they begin this journey, as well as help educate family members and friends. I hope that you my readers, will be respectful of that choice, and if you are offended at the thought it’s best for you to stop reading here.

At this point I’m still taking two naps a day (9:30 and 1:30) and am only good for about 2 hours of coherent conversation or “activity.” I’ve found it’s best not to try and watch any previously unseen movies or TV shows because I often find I have no recollection of what I’ve seen!

Sleeping sitting up has become the worst part of this, I know that’s silly to say but it’s the truth. I find I can’t really do more than doze and my back is killing me. I just wish I could do some Yoga and I’m counting down the weeks until I’ll be cleared.

And being cold…shivering. That is super not fun. My chest muscles uncontrollably contract over the expanders and pull on the stitches. Thank goodness Summer will be here soon!

Now that the complaining is done let’s move on.

At the end of week two I had my first appointment with the plastic surgeon. I hoped to get the drains out (which are annoying but haven’t posed any other problems for me) and planned to have my first fill. In order to get the drains out I needed to have 30cc or less drainage in 24hr and thankfully I was there. There are some women that have to keep drains in for months! I could tell the days that I moved around more (perhaps too much between you and me) because it would result in a much higher drainage. So, those of you that are having this surgery, follow doctors orders and keep still! 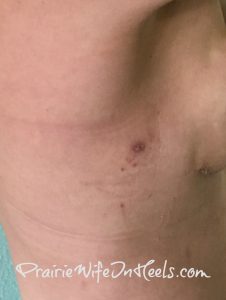 I was a bit nervous going into this appointment. I had heard from other women that both these procedures were excruciatingly painful.

Thankfully, The Cowboy was able to go on this visit and he pushed through his severe needle phobia (trust me he’s a big man and falls hard) and general dislike for all body fluids to comfort me.

I’m happy to say that for me the pulling of the drains was painless. Now I just have to small scabs that I need to take care of with Neosporin for just a few days and then massage to help reduce the scarring. The Cowboy was particularly impressed with how thin and hidden the scars below my breast were.

Next up was the filling process which really needs to be seen to believe. First they use a stud finder to find the metal area where they insert the needle. Then they put in a needle and slowly fill up the expanders with saline. I was able to get 100cc this time which put my total to 200cc in each breast. The filling itself was painless. It didn’t hurt to put the needle in or the saline on my left side. When it was done I just had a feeling of a bit of heavy pressure and tight muscles. It was crazy to see “round” where I had previously had “cliffs”. 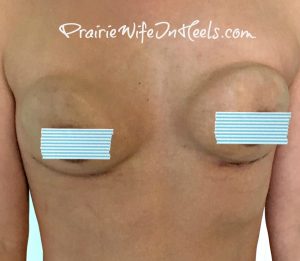 On my right side it was a different story. The expanders rest on my ribs because they are under my pectoral muscle. When the expander filled on this side one of the edges jabbed in between my ribs and got a bit stuck (remember my muscle is tight and holding everything in). Not gonna lie, I may have said a few bad words out loud and I kind of don’t remember much of the conversation we had after.

Probably more pain than I have had at any point in this journey.

As we started our 4 hour drive home I reminded myself to take deep breaths. So far, I have found this to be therapeutic for both my tight muscles and soul when I find myself feeling uncomfortable and in pain from this surgery. As the hours passed I was still uncomfortable but, as my muscles relaxed, the edge of the expander wasn’t pushing as hard.

Taking Ibuprofen has helped the most with that particular pain, as well as time and the afore mentioned deep breathing.

By the next day I felt 50% better and now three days later I feel almost perfectly fine.

As far as my “new look” I’ve had some time to become familiar with my breasts, and while they can best be described as two balls of play dough formed by Cowboy C and stuck to my chest (thanks to TallGirlJ for this totally hilarious and accurate description), I’m totally cool with it. Keep in mind if you’re having this surgery that mine are a bit wonky due to the way my pectoral muscles contracted over the expanders. Many people don’t have the obvious projection out that I have. I’m just lucky I guess 😉

It’s way easier to camouflage my “play dough boobs” than the cliffs I had before. And I have a feeling that with more fills they’ll look better and smoother. Worst case scenario, I’ll just buy a padded bra to wear for the three months until my next surgery.

I’ve had some arm numbness and shoulder pain but that’s totally normal and can be eased with a bit of massage or stretching the effected area. 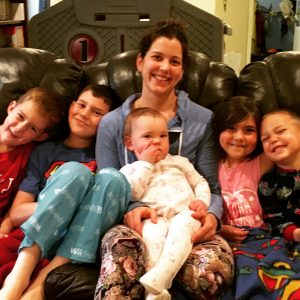 As I reflect on week two I find my overwhelming emotion is relief.

Relief that I’m one week closer to being healed.

Relief that between The Cowboy, Mary Poppins, and Ma things have been running pretty smoothly here at the homestead.

Relief that I now know I am strong enough to handle these next few weeks of fills.

Relief that I can now shower (but still two more weeks until I can wash my hair) and sleep laying down.

Relief that I received good news and all the breast tissue that was removed checked out as Cancer free.

Relief that I know I made the right choice.