My children have an almost decade long history of refusing to allow anything but my boobs to offer them nourishment or comfort. It all started with Cowboy J. He was born in March and because of my schedule as a teacher I didn’t have to return to work until he was 5 months old. I knew I would need to give him a bottle in the Fall and began pumping milk (I had 250oz pumped by August). When he was 6 weeks old we gave him a bottle of pumped milk, and he took it like a champ. I marked it off my list of things to worry about and like the first time mom I was (translation: idiot) went on my merry way…and never gave him another one. 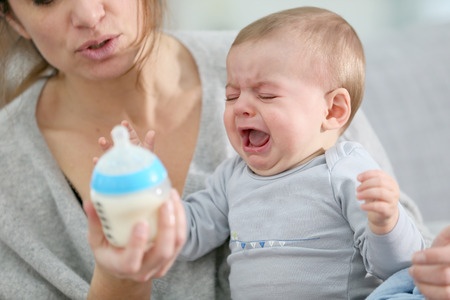 Summer soon drew to a close and August rolled around, I was preparing to return to work in a few weeks and decided we should start giving the baby a bottle every day to prepare him for the transition ahead. I handed The Cowboy a hungry Cowboy J and a bottle, gave him a kiss and started to enjoy a few moment to myself. It soon became apartment that Cowboy J was not interested in taking a bottle. He not only clamped his mouth shut but arched his back and screamed in utter fury. I began to panic, there was no way I could go to work without him taking a bottle. We spent two weeks trying to get him to take a bottle and eventually had to admit defeat. He wasn’t eating solid food yet and I was panicking. It all worked out eventually because it turned out that Cowboy J was more than willing to nurse every morning until he was gorged, and then wait until my lunch hour to eat again. The problem was solved and other then tears shed over all the liquid gold I had to throw away (I was unable to donate the milk) I chalked it up to a learning experience.

When Cowgirl G was born I had no need to have her take a bottle. I wasn’t returning to work and we were to poor to go on many dates, I never even tried to pump or give her a bottle. Cowboy W and Cowboy C were the same way. By that point it was a luxury to only have one child with me so taking my nursing babies everywhere (even on our dates) wasn’t an inconvenience at all. Frankly, by the time we had Cowboy C, I had a bit of separation anxiety about being away from my babies for more than an hour and a half. The Cowboy literally pried him out of my hands when he was 6 months old and left me with tears streaming down my face insisting “A break will be good for everyone…trust me…”

When LittleMissH was born I figured I would stick to the same thing I did with all the other kids. Nurse on demand and take her everywhere with me. But then The Cowboy threw a little hitch in my plans. For my birthday this year he got me a super sweet and romantic gift. Tickets to the Aerosmith concert at Cheyenne Frontier Days. It was not only reminiscent of where we met but also our first date. I mentioned that we would have a 5 month old baby and he shrugged and said we’d work it out…I immediately began to stress. LittleMissH is a cluster feeder which means that she often eats every half hour for a few hours straight. While this may sound terrible it actually works great as it allows her to go more than two hours without eating, and she sleeps longer (major win). Of course her main cluster feeding time is in the evening, the same time as the concert. CowGranny graciously offered not only to babysit but, to hang out at the grounds with the baby so I could run out and nurse her whenever she needed it.

While this was a wonderful offer, it seemed like it would make our date pretty complicated and not very much fun. So as a surprise for The Cowboy I started to pump on the sly and declared that I was going to get LittleMissH to take a bottle. I bought a bottle and a variety of nipples and TallGirlJ had the honor of giving her the first bottle. She took about 2 oz and while she didn’t exactly take to it like a duck to water, she didn’t cry at all. I sighed with relief and deiced that LittleMissH’s zen personality was going to make this a piece of cake.

Cue the next week of her refusing to take the bottle. She would start out smiling and cooing while chewing on the nipple. Next would come pushing the bottle out with her tongue while looking at me with a combination of confusion and amusement. Finally there were looks of anguish, crying, tears, and anger, all culminating in an exhausted sleep. The whole time I would talk to her and encourage her to take the bottle, sing a variety of sweet songs, and rock her while squirting the milk in her mouth. The Cowboy tried to give her a bottle twice, and was so upset with her crying that he refused to help again…

By the end of week two she still refused the bottle but was resigned to the process and at least wasn’t crying anymore. We had it down to it “only” taking 45min to get 3oz in her…but I was determined to do this. Not only was the idea of a grown-up-only date night with The Cowboy looking better and better but, so was the idea of being able to go for longer runs…and a girls night out sounded pretty nice too! By week three she was starting to latch on for a few sucks and I felt that victory would be near. 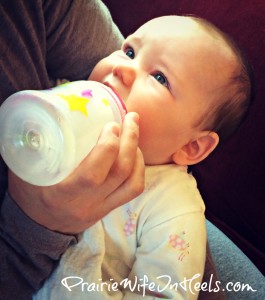 This last week (week 4) we went to visit Ma and Pa in the land of Dairy Cows and Beer. We decided to leave a bottle and some milk with Ma so we could go on a kid free date for our 11 year Anniversary. I knew if anyone could get LittleMissH to take a bottle it would be her, and also perhaps with me being gone she would do better. Ma used the tried and true trick of putting a little sugar on the nipple and LittleMissH took 2 oz like a champ, latched on and everything. The next day Ma took the time to give her another bottle and she again took 2 oz! Yesterday true victory was achieved when she sat with me and took an entire bottle like a “normal” baby. Make sure you follow us on Instagram so you can see what are sure to be some epic pictures of our big night out!

Have you ever struggled with getting a nursing baby to take a bottle? What worked for you?

Previous Post « 5 Ways to Fall In Love With Running (again)