It Wasn’t Supposed To Be Me 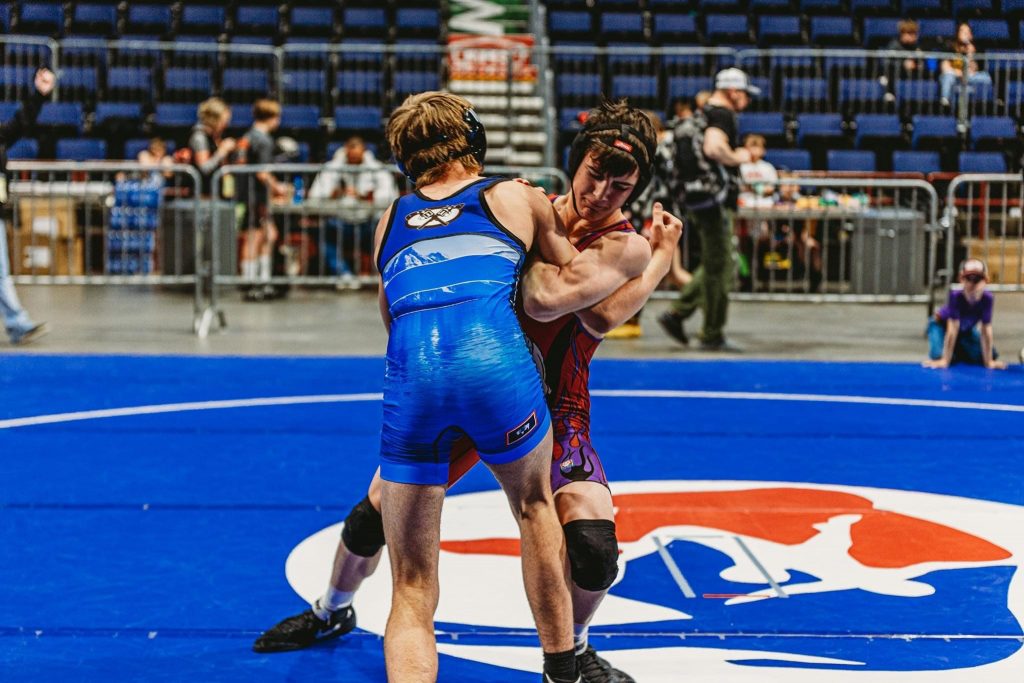 Standing on the edge, watching my son wrestle…hearing him scream, and seeing my husband rush to him.

Kneeling on the wrestling mat, listening to the medic ask my son if he could move his fingers.

Nodding and answering questions, holding back tears, unable to touch my son and comfort him in case I bumped him and caused more pain.

Agreeing that it was better to be safe than sorry, watching as they strapped my son to a backboard. Telling my husband what items to grab and put in a backpack…letting the paramedics know that I’d be riding with my son.

I honestly didn’t even ask if I could, I simply stated that I was coming. 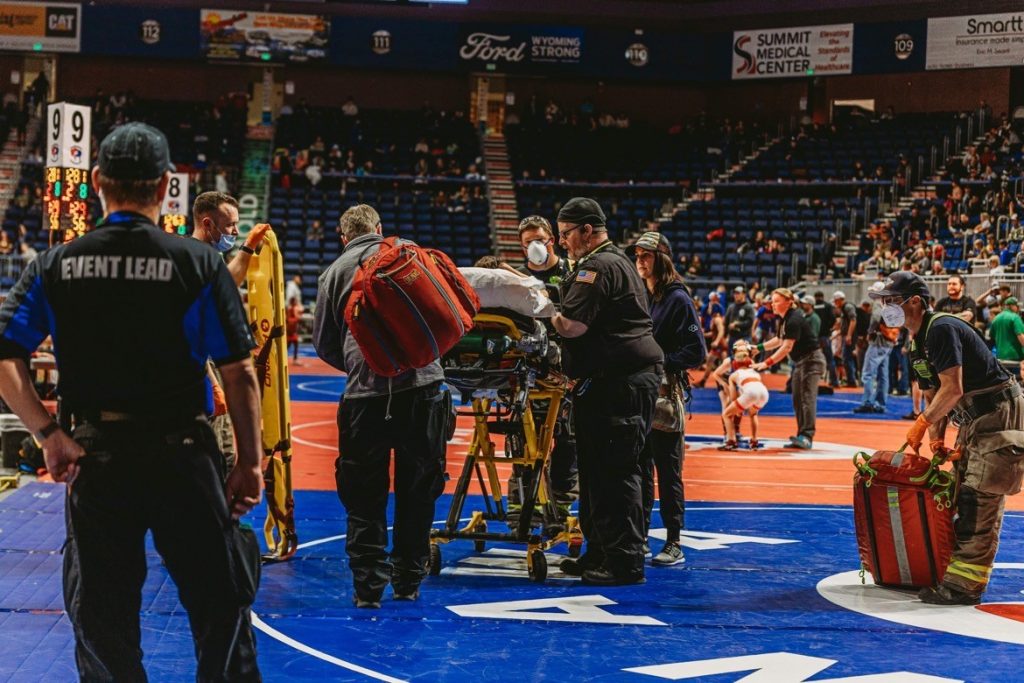 Sitting in the ambulance brushing the hair out of my son’s face, dabbing at his tears with gauze, and saying whatever came to mind to distract him from his very real fear.

I told him this was a crazy way to try and get out of prom.

I told him that I was going to make sure we could get him cleared for animal chores ASAP, because I did not want to hay horses in the morning before work.

I mentioned that we had just had our first year ever where we didn’t meet our deductible and thanked him for ruining it.

Waiting in the ER as they took my son for x-rays to see if his back was broken.

Ignoring every buzz of my watch indicating another caring and kind text message was coming through because it was taking all of my mental and emotional strength to keep my shit together in front of my son.

Siting with hands clenched so hard they ached later.

Praying for my son.

Asking for strength, wisdom, and fortitude for whatever lay ahead.

As we waited to hear the results of his x-ray the passage of time was fluid.

In moments it was endless…and at other times it went by so quickly I can’t even tell you what I said or did.

I don’t know why I still couldn’t breathe deeply after they told me he was going to be okay.

As they walked me through the injury and gave us a prescription for the pain.

When they allowed him to stand up, I held the breath of air that I had barely taken in…and I still don’t think I’ve let it out.

Cowboy J started Physical Therapy last week, and while he hasn’t been cleared for sports or strenuous activity…it won’t be long before he’s back to running, lifting weights…and yes…wrestling again.

It wasn’t supposed to be me, until it was.

We like to think that the tragedy and the tough times happen to “someone else” until they happen to us.

And then we are left, sitting deep in a moment that comes directly from our parenting nightmares.

A moment that can’t be ignored, and will only finally be over after it has been lived.

I’m so damn proud of our boy and how he’s handled all this.

The pain, the fear, the unwanted attention, and now the tough road of recovery that lies ahead for him.

The blessing is, that after having gone through this before, the battle is more of a physical one than a mental one.

And I have to finish this with one more thing…

Cowgirl G was also wrestling at State that day and had to face her opponent after watching her brother get hurt, and before he had even been removed from the mat.

“Poor girl was stepping on the mat as they carried [your son] out and I was blown away by her performance despite everything that was going on around her.”

I am thankful for The Cowboy who stayed behind to be with the other kids, and the coaches and team members that rallied around us. 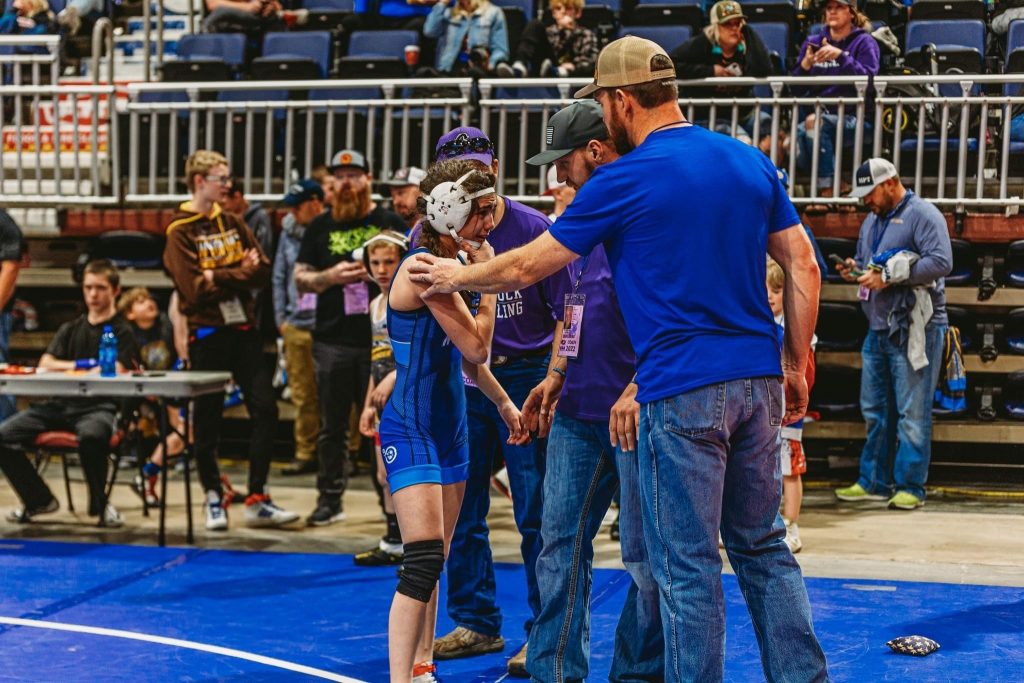 But when it was, I was blessed with an entire community of people, including our readers, that sent up prayers for our son.

People who stepped up and helped us so we could focus on our boy.

The Cowboy and I know that the life we have chosen to live is full of risk.

From Rattlesnakes in the yard to pack trips into the backcountry of Wyoming…we know that to live this kind of life means that we or our children may suffer pain along the way.

It wasn’t supposed to be me, but it was.

And I’m under no illusion at all that someday it may be me again.

Time and again, I will use my faith to combat my fear.

I will fold my hands tightly in prayer, lift my head up high, and walk the path before me with courage.

And I will continue to share my stories openly and honestly so that others may be inspired to lead a life of grit and grace.

Why are we so passionate about wrestling? Learn more about what this sport means to my family here.

4 thoughts on "It Wasn’t Supposed To Be Me"

Previous Post « A Quick Look At Some Of My Favorite Swimwear

Next Post Is A Robot Vacuum REALLY One Of The Best Gifts I’ve Ever Gotten? YES! »