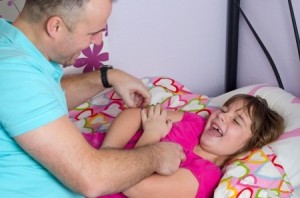 With this title, I’m sure you’re thinking that you’re about to read a post about humor, ways to play with toddlers, etc. Nope, that’s Prairie Wife’s area of expertise, not mine. Instead, this is a post about disciplining stepchildren.

Step Girl and I were just talking about this technique a few weeks ago.* I’ve mentioned previously that I had a yell-free home before “yell free” was even a phrase. About 90% of the time my whisper technique worked beautifully, but every once in a while I needed to get my message across more forcefully. I had permission from both The Texan and The Ex to spank the kids, and I know they would have totally supported me whenever I decided this course of action was necessary. Heck, the elementary school principal even had permission to paddle the kids in lieu of detention or suspension! However, I was never able to administer the paddling properly. The Texan just had to think the words “spanking” or “butt busting” and the kids straightened up. Me, not so much.

Just like the whispering technique, you have to wrap your head around this concept–the primary purpose of a reprimand is to have the bad behavior stop. What is one of the best ways to distract kids? Tickle, Tickle, Tickle. I’m sure the first time I said, “If you don’t stop, I’m going to tickle you,” the kids thought I was crazy. They probably thought, “What kind of inhumane, “Yankee” tickle torture are you introducing into our house?” But it was effective, I never tickled until they were gasping for breath and both of us were in a better mood after the punishment than before. You sure can’t say that about spanking.

Although Grandbaby is just a few months old and could never do any wrong in my eyes, I’m sure her father will feel differently one day. I asked Step Boy (should that be Step Man?) if he thought he would spank like his dad or tickle like me, and he blurted out, “Spank.” But then he followed that up with, “Well, probably both, depending on how naughty she’s being and how many times she’s done it before.” So bottom line, do what is best for your child and your parenting approach, but also consider having several disciplinary tactics in your punishment toolbox.

*Someday I will tell you in detail about the wonderful way The Texan proposed. For the purpose of this post, he asked the Steps’ permission to marry me, and they quickly agreed. But Step Girl can be a smart and shrewd negotiator, so after I had my ring she (jokingly) told me that she would oppose the wedding unless I agreed to not tickle her for six weeks. I agreed. Why? Because I knew that even though there was a ban, if I said I would tickle her she would stop what she was doing to tease me! We both made it through those tickle-free weeks and still laugh about it more than a decade later.