The Red Tent by Anita Diamant

As you can see by my picture, this book is well loved. If I had to guess I would say that I personally have read it half a dozen times, and I 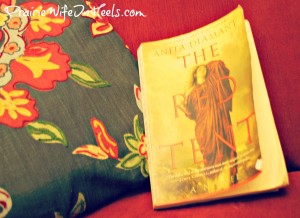 know that I have leant it out to at least that many friends. The first time I read this book I was in my early 20’s, I had just been married and was trying to decide what being a “wife” meant. It was a shocking transition for me. I had plenty of time to wrap my head around the while wife concept, The Cowboy and I were together for three years (engaged for one of them) before we were married. But, for some reason it was a struggle, and I found I wasn’t totally confident in my identity anymore. When I picked up this book it really struck a chord with me and became a huge personal favorite. I now read it every time I get pregnant (or am feeling a need for some feminine power and inspiration) and it just reinforces a sense of strength in me about who I am as a woman, wife and mother.

The Red Tent by Anita Diamant is a historical fiction novel (my personal favorite genre) that takes place in the times of the Old Testament. Diamant uses the book to further tell the story of Dinah, who is only briefly mentioned in the book of Genesis. She is the only daughter of Jacob, and her twelve brothers include Joseph of the infamous many colored coat story. In ancient times when woman were menstruating or after having a baby, they were sent to the red tent, because they were considered impure or unclean. At first this may sound terrible but the more you think about it, wouldn’t it be nice to be by yourself (or with a few other woman) with no chores or obligations during this time?

The book starts with Dinah sharing the stories of Jacob’s four wives, her mothers. The tales of their forced lives together and the resulting tangle of emotions; love, heartache, friendship and envy sucked me in. It’s like a biblical version of the hit TLC show Sister Wives! The detail in which Diamant discusses their daily life made it easy to imagine how they lived, and her almost lyrical writing made it impossible to put down. As women struggling to live in a society where their main purpose was to bear children and serve men, my heart went out to them, and it made me appreciate the freedoms I take for granted. Finally, after ten sons were born to Jacob, his wife Leah bore him Dinah…Now her story truly begins.

Her childhood and growth towards womanhood revolves around the lives of her mothers and her brothers. As Dinah grows she learns, through her mother Rachel, the art of midwifery. She becomes a student of the intricate mysteries of women and how life begins, and sometime ends, in the same breath. Her own tragedy in love results in an exile to a foreign land, where her skills as a midwife earn her both her life and opportunities not usually offered to women. Her story becomes entangled with those of many other women. Every time I read this book, I find myself caught up in the ability we have to impact everyone we meet. Without ruining the story I can tell you that it ends with Dinah’s death and these words “Blessings on your eyes and on your children. Blessings on the ground beneath you…”

2 thoughts on "The Red Tent by Anita Diamant"