My first season as Football Mom officially ended on Friday.

Though it was only eight weeks ago that I took on this new role, by the end of the season, it felt a lot longer! I am still proud to be a Football mom and I’m looking forward to next season but, I’d be lying if I didn’t say there weren’t some things that sucked. 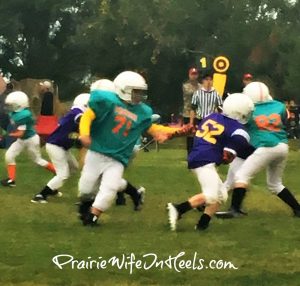 I’m not just talking physically, though that kid can now pound out 20 pushups like a pro. He learned to accept defeat (sadly they never won a game) and to swallow disappointment and focus on the positive. Not only in his own playing, but in that of his teammates as well. He learned to hustle and get his school work done quickly so he could head back into town for two hours of practice. He learned to push through physical pain and weariness and to encourage others to do the same.

I’d be lying if I didn’t add that staying quiet and allowing him to grow in these ways wasn’t easy.

Watching him hold back tears after he fumbled, and seeing him an emotional wreck after losing another game, tore at my heart in ways I never expected. I found myself saying over and over that it was about playing his best, about personally growing, not winning a trophy…all the while praying that they would win just one game…heck just score a touchdown! These last few weeks I watched him struggle with the crappy emotions of frustration and defeat, and knew that I couldn’t do a single thing to help him.

It’s something I wasn’t quite prepared for as I entered into the world of sports.

It’s life, and in my heart I know this is all good for him. He’s learning to deal with the ups and downs that come with living. Luckily he has us behind him, offering encouragement, and teaching him how to handle the fact that sometimes things don’t go your way.

But, holy cow is it hard. 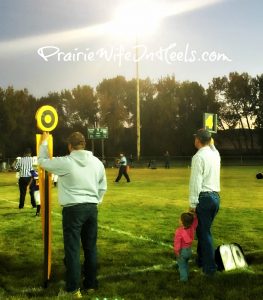 Let’s talk for a minute too about the logistics of getting a kid to and from games and practices.

With four other kids in tow, and with a schedule that changes almost daily in both time and location…can I whine and add we live about 20 minutes outside of town?

Thank God for good neighbors that have a son in the same grade and football program. Having someone to trade pickup and drop offs with was amazing (I can’t encourage you enough to make friends with the other football moms) and a life saver on more than one occasion.

Getting dinner on the table was tricky. We attended almost all the games as a family and many of the practices too. This meant that we weren’t home until after 7:30pm. While I’m a huge fan of crockpot dinners there are only so many times in one week I can make them! I held strong and we didn’t eat out until week 5…and even then it was only a few times.

Until the last two weeks…

I was over the long nights and the running back and forth. The Cowkids didn’t seem to mind the weeks of late nights spent outside in the rapidly cooling weather (is was 20 degrees and snowing one game) but, it was getting to me. The last week of football we ate out four times. I figure that if I took the number of times we ate out and divided it by my 8 weeks as a football mom (or wait is that backwards) it worked out to once a week or so…that’s not too bad is it?! 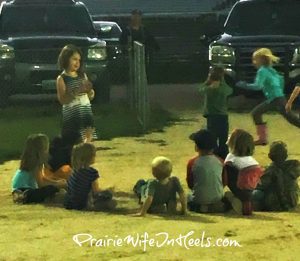 The Cowkids never dwindled in their enthusiasm, and cheered on their big brother during practice and football games all season long. LittleMissH soon became a pro at yelling “GO, GO, GOOOO!” They loved the time outside and soon formed a small gang with the other younger siblings. They played tag, cheered on their brothers, shared snacks, and generally ran wild and free.

It was really nice to chat with other parents. It reminded me why I love Wyoming and its small towns. Everyone was eager to chat and we all cheered for the whole team, not just our kids.

My heart was warmed on more than one occasion when I had friends show up to watch Cowboy J play. It was such a big deal not only to me, but to him, to see them cheering along on the sidelines. It gave me some new perspective, and I now plan to take the time to attend more of the sporting events I’ve been invited to. 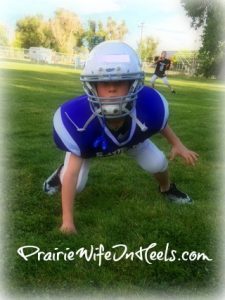 I am a Football mom, and now, I am a wiser one.

Next year I’ll be prepared for the emotional ups and downs, the celebrations and the defeat.

I’ll be ready to see my son taking those small steps towards being a man.

I’ll be ready with meal plans and cash for drive through dinners.

I will make sure I never run out of Tide laundry detergent and won’t sweat the days we forget to wash his uniform.

I’ll fill up the gas tank before it’s on empty and pack an extra chair and blanket for the mom that forgot them.

I am a Football mom and I’m ready for next season…but thank goodness it’s a year away!

2 thoughts on "I am a Football Mom: Reflections on my First Season"

Previous Post « Two New Ways to Deal with Your Period