Prairie Wife:  One thing I love about this blog is our ability to share a variety of different view points through our Prairie Wife of the Week posts. As you know, we have a few women that frequently contribute to our site. They each bring a unique look at life to the site that keeps it fresh and honest. My big sister Texas Two Steppin’ and partner in crime TallGirlJ have been with us from the very beginning. Today I would like to introduce a new frequent contributor, BonitaBlueEyes! She has become a close friend of mine over the last two years and her spicy personality shines through in her writing. Stop by our author page to read a little more about her and get to know her through her first post! 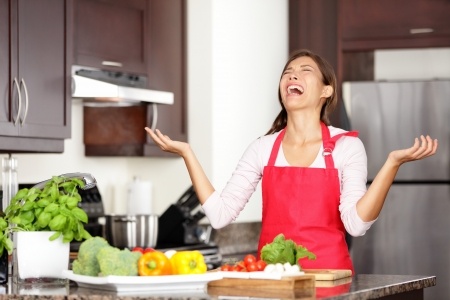 For the last two months of my third pregnancy I went on a cooking strike. Because I believe in doing everything 110 percent, I also quit meal planning and grocery shopping. It was a liberating experience, and something I know every pregnant woman (or any mom really) secretly dreams of doing. The simple truth was, I was tired of cooking. I was hugely pregnant, working part time as High School Spanish teacher, and dealing with the care of a preteen son and toddler daughter…not to mention my husband. Every step of the entire process of making a meal for my family was just utterly unbearable to me. Even my beloved Pinterest couldn’t help inspire me.

You are probably thinking that I’m somewhat of a drama queen at this point. You wouldn’t be the first lol! Since I am new to PrairieWifeInHeels.com, let me give you a little more background on what led up to this strike…

I haven’t eaten meat on purpose in eleven years, and I chose to marry a man who grew up on a ranch in Mexico. He was raised by doting women who cooked three large meals full of meat and starches a day for him. In contrast, I was perfectly happy grazing on my vegetation snacks all day long (with as little cooking as possible involved). When we were first married, I winced at the sight of meat in the cart, would not enter the kitchen if he were cooking it, and made him use a special separate cutting board that I refused to touch even when clean.

Over the years I’ve come a very long way in the name of love. Now I will actually throw some meat into recipes as long as I don’t have to directly touch the poor animal with my bare fingers! Like a typical woman, I expected this self-sacrificing of my morals to be met with the deepest appreciation from my loving husband…Ha! Instead, he complained at 90 percent of our meals and then refused to eat leftovers for his lunch. Don’t forget there is also a toddler that eats 3 bites a meal and a picky tween involved at each meal time as well. You can see why making a meal to please everyone was causing my blood pressure to rise. I tried everything! Heck, I could start my own blog with my creativity of how I accommodate us. But a women who is pregnant, swollen and tired, can only take so much before she is forced to take drastic action.

One day, I simply snapped. It was Sunday and our typical family grocery shopping day. “When are we going to the store?” My husband asked me. I looked at him and silently handed him my list: 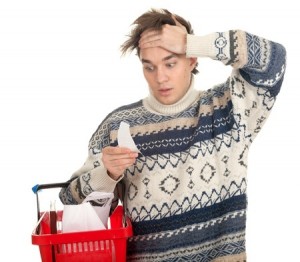 I announced that I would not be presenting myself in public unless entirely necessary. He took it rather well, I must have looked as miserable as I felt! He left without protest and even took our two year old. I closed my eyes and laid back onto the couch thinking…this is awesome! I got out of grocery shopping on a Sunday AND time alone?! And then my husband came home….

Besides forgetting several items on my short list, he brought all processed, boxed food and junk snacks for him and the kids to eat. I gritted my teeth, bit my tongue and continued my strike out of physical and mental necessity. Over the weeks his shopping skills began to improve. After all, a man’s system can only handle so much grease and fake cheese before it starts to rebel. The generosity of family and friends in bringing us meals after the birth of our daughter helped me keep up my strike as well.

My daughter was born in May and my strike finally ended on Father’s Day. Mentally and physically I had finally begun to be back to “normal” and I felt that by this point my husband would surely appreciate my efforts a little more!

As I sat and read this post to him, thinking to add a little of his male insight to the incident, I discovered that he didn’t even know I was on strike…I hope he was just teasing, and trying to get a reaction out of me. I know for sure he hasn’t complained ONCE about the meals I’ve prepare since, and my children seem to have improved their appetites and attitudes as well. Sometimes I wonder, perhaps I should have continued the strike and enjoyed my freedom but, maybe the break resurrected a whole new set of skills in me?

Have you ever gone on strike, or wanted to? I’d love to hear your stories!

6 thoughts on "My Pregnancy Cooking Strike"

Previous Post « A Constellation of Vital Phenomena by Anthony Marra