A Constellation of Vital Phenomena by Anthony Marra

I’ve read more than 20 books since the last book review that I wrote here on the blog. What can I say, I love to read even more than I love to write! I’ve realized that often times I go on kicks and read a certain genre or time period for a bunch of books and then find myself in the mood for something else. Lately I’ve been on a French kick. Perhaps it’s because the cold Fall weather is officially upon us, and I’m longing for the warm sun and historical streets of the French Rivera…or maybe it’s just that since becoming pregnant with CowBaby5 I’ve been feeling much more feminine than usual. While I’ve read several good books there weren’t really any that I felt like I needed to share with you. There was nothing that stood out as particularly enjoyable or life changing, until this week. 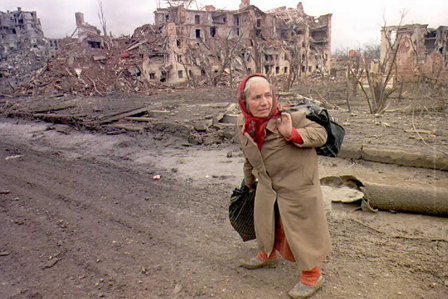 For some reason my mood switched this week and when I went to my Amazon.com wish list to find something new. I decided to try out A Constellation of Vital Phenomena by Anthony Marra. It is neither Historical Fiction  nor French but rather a modern novel (it takes place in the 1990’s and early 2000’s) about life in Chechnya. I vaguely knew that Chechnya used to be part of Russia but in the early 90’s when the USSR dissolved it became independent…sort of. I’m the first to admit I am not up at all on current events; and was in my self-centered High School and College years during the time of this book. I know in a somewhat vague way that Russia and its bordering countries have been struggling for decades to regain a non corrupt economy and better quality of life for its people. The recent events in Russia and the Ukraine have definitely not escaped my notice but, until I read this book I had absolutely no concept at all of what had happened to the people of Chechnya, nor a true understanding of what it means to live in a country full of political turmoil.

To make a long political story short (click here if you want to see an easy to read timeline of Chechnya’s recent history) for the first 15 years after it declared Independence in 1991 Chechnya was riddled by war and terrorism. In 1994 Russia sent troops to Chechnya to crush the Independence movement. The result of this 20 month war was a death count of over 100,000.

A Constellation of Vital Phenomena 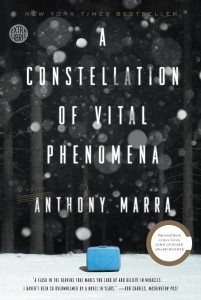 takes place during the time of this war and the aftermath. Cities are leveled, there is no electricity, no fresh water, no food, and whole families disappear into the night and are never heard from again. This sounds like something from Nazi Germany…but it all happened as I sat up late into the night sipping Pepsi and typing term papers on my laptop, just in the last decade. I was completely oblivious to the fact that I was taking so much for granted. I ended this book with an appreciation for the life I have been given as an American, and a resolution to be more aware of the suffering of others in this world.

This books shares the stories of a small village in Chechnya and several of its inhabitants that are linked by the love and friendship of days gone by, and the realities of betrayal, torture, and death that are upon them as a result of war. It’s about a father’s love and hatred for his son, a neighbor’s responsibility for a child, and one woman’s struggle with the ghost of who she has become.

It sounds weighty and depressing I know, and don’t get me wrong there are parts of this book that left me with my mouth hanging open and tears in my eyes. But through it all Marra’s absolutely stunning writing conveys such an honest picture of human emotions, and the strength of the human spirit, that you simply can’t stop reading it and searching for each grain of hope that he leaves behind. There are characters you love to hate, and ones you know you should hate but love. From the beginning I knew how this book would end, but trust me, you will read it anyway. Knowing that despite all the terror it will end with life and hope.

Click here to see some more book reviews by Prairie Wife on Amazon.com