When I finally dived in and made my own Homemade Spaghetti Sauce I felt like I had really accomplished something. A pot of simmering Spaghetti Sauce on the stove is just so homey! I spent the first few times just throwing in this and that until I settled on a recipe with good flavor and consistency that the whole family gave two thumbs up. Feel free to brown some meat in your pot and then add the other ingredients to simmer and stew if you prefer meat sauce. I also like to sneak in extra veggies (and thicken the sauce up a little) by adding a cup of pureed zucchini, squash, kale or spinach. It won’t change the flavor but adds a ton more fiber and vitamins. Or, make a batch of our Quick and Easy Meatballs and throw them in to make a hearty Spaghetti dish that will have your kids (and husband) asking for seconds! 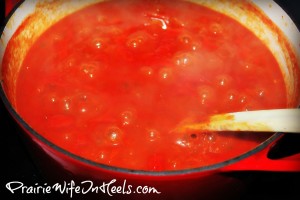 1. Take a large sauce pot and place the onion, garlic, olive oil and sweet pepper into the pan. Saute on med high for approx 5 minutes or until they are just getting soft. If you are adding meat to the sauce put it in now to brown as well.
2. Add all the other ingredients and stir thoroughly. Place the lid on and bring to a boil.3. Once the sauce is boiling let it simmer for 20minutes-6 hours depending on your schedule, stir occasionally. The longer the sauce simmers the more flavorful it will be.
4. Serve hot over pasta.

Note: If you are adding meatballs I like to cook them first and then just add them to simmer for the last few hours. If you are using frozen meatballs (that are precooked), add them frozen into the sauce at least 1 hour before serving.

Next Post A Constellation of Vital Phenomena by Anthony Marra »