I am the Adult 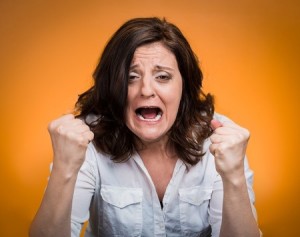 I have always said that nothing knocks you to your knees like being a parent…and these past few weeks I feel like I’ve been on my knees more often then I’ve been standing.

It’s pretty much common knowledge that “the terrible two’s” is actually completely inaccurate. Anyone that has a child over the age of four knows that three is much worse…so much worse…

See, a two year old is still eager to please there parents, and somewhat limited in imagination and height. This means you can still manipulate their behavior in your favor (most of the time) and you are only on “death watch” 50% of their waking hours.

A three year old is much more focused on their needs and wants than others, has a vast imagination, and can reach and open most doors and find a way to access pretty much everything in your house you don’t want them to find. This means you have little to no ability to talk them into doing what you want and are on “death watch” 243% of the time.

Cowboy C is only 2 and 3/4  but like the little overachiever he is, he’s been acting like a full fledged three year old, and giving me a run for my money. Being crazy busy with the other Cowkids, trying to keep up with blogging, taking time to enjoy my friends, and being completely sleep deprived for almost a decade has caught up with me…and made the normal drudgery of parenting an almost three year old boy just a bit more wearing than usual. 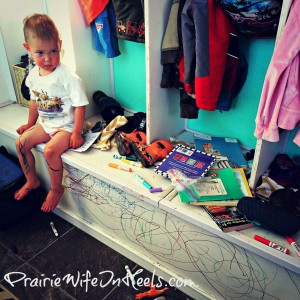 Yesterday I kept track of the utter ridiculousness that is disciplining a three year old. Cowboy C was told five times to finish his breakfast, three times to clear his spot at the table (with time out in between each time until he said he was ready to listen), told to get undies, pants and a shirt six times (with three times in time out and a spanking for telling me he was going to put me in time out for being mean), and a stern reminder to ask first before getting out glitter and glue for an art project (I left the room to change LittleMissH’s diaper). This was all before 9:30…I gave up keeping track after that.

To stay sane I have two mantras that I repeat over and over in my head as my child is throwing a tantrum in the hushed hallway of his siblings’ school…or as I am yet again telling my naked child to sit down and fold his hands until he is ready to get dressed.

Mantra One: “I am the adult”

It can be hard not to throw my own yelling tantrum when I’ve been pushed to my limits yet again. The hardest thing for me is to forgive my child and be loving and kind when they suddenly decide they are ready to behave. Reminding myself that I’m the adult helps me to take a breath and stay focused on being firm yet calm.

You know when your child has reached terrorist status…perhaps it’s when the tears start, or the screaming begins. For Cowboy C he gets a certain glint in his eye and I know he’s about to dig in. In times like this it’s best to just stand silently while they let it all out or remove them from the situation (to their room or your car) and then physically remove yourself from their line of sight (or just stand in stone cold silence). Trust me, nothing will be accomplished by trying to negotiate with them or threaten them when they’ve reached terrorist status. The tantrum will eventually end (and last less and less time each occurrence) and then you can go back to mantra one and  talk about appropriate behavior.

What (besides alcohol and a babysitter) helps you stay sane through those tough parenting moments?

4 thoughts on "I am the Adult"