We all expected him to die while driving. Eyes bleary, he drove with a passenger seat full of empty beer cans. But that was television, and he didn’t die — didn’t even crash. 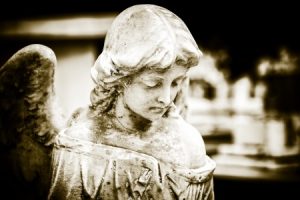 Just days before, though, a 22-year-old son, brother, grandson, boyfriend — and great friend of so many — died while grabbing a ride home.

The driver of that car is facing many criminal charges, including aggravated vehicular homicide. He, too, is someone’s son. Because we are people of faith, we assume justice will be served. But the young man will not be coming back.
My faith means a great deal to me, even though I was raised in a house where it was understood and expected, but not talked about much.
Much later as a young woman, I remember my mom saying that Catholicism is not a buffet, you can’t pick and choose what you practice and what you cast aside.

This will sound all wrong, but the time that I appreciate being Catholic the most is not on Christmas or Easter, but when I attend a Catholic funeral. The ritual is comforting, the belief firm that the soul never dies.

The ritual is comforting, the belief firm that the soul never dies. @wyosas

That does not bring the deceased back. His family and friends will forever miss his physical presence. But at some point, when their unbearable and oppressive grief begins to age, they will take comfort that they raised a young man in a faith that ensures a forever.
And to them, I say now,”Eternal rest grant unto him, O Lord.
And let perpetual light shine upon him.
May he rest in peace.
Amen.

May his soul and the souls of all the faithful departed, through the mercy of God, rest in peace.
Amen.”