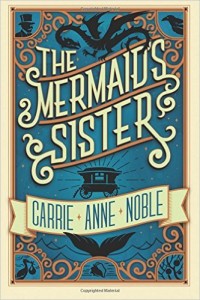 I love novels, and I often find it hard to immerse myself in biographies or essays. I just can’t seem to get lost in them the same way I do a fantasy or historical fiction novel. The Mermaid’s Sister by Carrie Anne Noble is one of those novels that I dove into and hardly remembered to come up for air. I admit that my house and children were ignored for a few days longer than usual, as I sunk into the depths of this lovely fantasy novel (OK I’m done with the not so subtle sea references).

Technically billed as a novel for young adults, Noble’s sweeping novel about two sisters, their sacrifices for love, and journey to self acceptance will please readers of all ages. I do need to say that I think it is more for the older teens rather than tweens, due to some of the sexual undertones and violence. The story begins high on a mountain where we meet the wise Auntie and her two adopted daughters Clara and Maren. Their lives are tinted with magic and the arrival of Aunties friend and his adopted son O’Neill brings more questions than answers to their past and future.

It won’t ruin the story to tell you that Maren slowly at first, and then with alarming speed, turns into a mermaid. Her life is in peril on the mountain and it is up to O’Neill and Clara to take her to the sea before it is too late. Their journey is fraught with peril and full of wonders and unsavory characters alike. Clara battles the all to real human emotions of jealousy, fear, and despair. While O’Neill offers strength, hope, and unwavering love for his adopted “sisters”.

I found myself drawn to the fascinating story as well as Noble’s ability to create characters with vividly real emotions and reactions. The Mermaid’s Sister is well worth picking up. I promise, you won’t regret immersing yourself into it’s beautiful crafted story (I had to do one last sea reference).

What books have you read this summer? Any that you would recommend?

One thought on "The Mermaid’s Sister By Carrie Anne Noble"