Those of you that follow us on Facebook and Instagram know that this weekend I ran my first-ever half marathon. I’ve run one for training but, this weekend was the day I’ve been working towards since January. 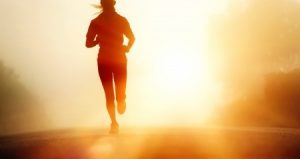 My half marathon dream was born more than a year and a half ago when I made the decision to undergo a preventive mastectomy. After running a 15k in the fall of 2015 I knew that adding a few extra miles and turning it into a Half Marathon was physically possible…but the time it would take to do this seemed like too much.

When I began the process of learning what my preventive mastectomy and reconstructive surgery would entail, I realized that I would need to have something to focus on during the hard days. I talked to The Cowboy and shared my dream, and he agreed that when I made it through the year of surgery, he would make the time commitment to watch the Cowkids and not give me grief about the cost of a few new running items.

My final surgery was at the end of November, and I was cleared to exercise again in January. I hit the trails with snowshoes and attempted to cross-country ski (I’m excited to get better at it this winter) and as soon as the weather allowed I was running. I entered an 8 mile trail run in July to ensure that I would stick to a training schedule and not give up. While this particular run kicked my booty, I finished without walking and then kept on adding the miles.

As the time came closer, I began to get a bit nervous.

Was I really running enough?

Would the 1,000ft altitude difference impact my ability to run?

I ran 15 miles here, two weeks before race day, to ensure that I could handle the 13.1 half marathon. I never fully trust my iPod to get the distance right and I figured over-training wouldn’t be a bad idea. 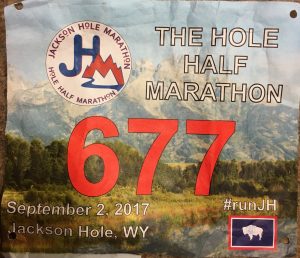 Ma and Pa flew in to watch the kids so The Cowboy and I could head to Jackson Hole, Wyoming. We totally took advantage and stayed there all weekend. We had a lovely dinner Friday night after I checked in and got my race number and shirt, and took a little walk around our hotel area.

I was up at 5 am on race day, dressed, and gathered my gear. The Cowboy filled my pack with ice and water and walked me a few blocks away to the shuttle. It was freezing cold and pitch black, I gave him a quick kiss and hopped on the blessedly warm bus.

I sat next to a lovely woman and nervously chatted her ear off. She was working towards her goal of completing a half marathon in all 50 states and gave me some great advice…just get across the finish line…nothing else matters…just get over the line.

I decided to get off the bus right away, despite arriving 30 minutes before the start of the race. I instantly regretted my choice when the frigid mountain air hit my face. Never one to walk away from a challenge, I wandered around the parking lot a bit, then gave up trying to get my blood into my appendages and stood near the start line. I began to gab away (the more nervous I am the faster my mouth moves) with two lovely “girls” who turned out to be the same age as me…whatever beauty secrets they knew they needed to share, a government worker from Washington DC (she was super happy to be in Wyoming) and a firefighter from Texas. 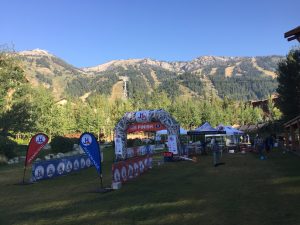 He assured me if he came across my body on the sidewalk that he’d get it to my husband, which was really nice. I have to add, he gallantly gave his coat to one of the other runners when he saw her shivering…my big sis Texas Two Steppin’ would have been proud.

They announced the five-minute warning, and we did last-minute checks of our hydration packs, shoes, and iPods. I had already dropped my iPod and shattered the screen about 10 minutes previously so I took a deep breath and got it set up the best I could. I crossed my fingers and hoped I didn’t have to spend the next two-plus hours with only my thoughts. I sent up a thank you prayer as some quality 90’s Brittney blared in my ears at the same time the race began.

Everyone started out in a pack, but as the race went on, people spread out and there was no need to pay attention to anything but the fantastic scenery.

As we traveled along the route, we passed open meadows, majestic cabins, and a bridge over the Snake river. As we began the slow and steady climb up from Jackson through Wilson and towards the finish line at the Teton Village, the weather started to warm and I began to regain feeling in my hands and arms (next time I will bring a long sleeve shirt and gloves). I was hoping to see a moose or a bear (far enough away to be cool but not a threat), but instead saw cows, horses, and a few hawks. The site of the rugged Tetons in the distance was enough to make me smile, and as I felt my body begin to claim that this was “the worst idea ever” around mile 10 I kept my eyes on their rugged peaks.

My goal was to beat a 2:30 time, and I’m thrilled to say that I crossed the finish line at 2:14.55. The Cowboy was teasing me about my emphasis on the fact that I was under 2:15 but agreed that after running 13.1 miles, I deserved to take credit for the 5 seconds under…what a guy 😉 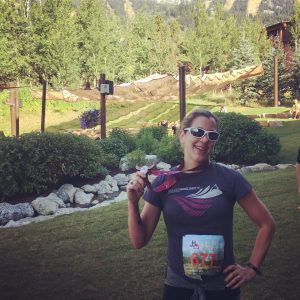 I admit that immediately after crossing the finish line, my main thought was to keep moving and catch my breath, but after it had sunk in that I had really and truly completed my first half-marathon race, I felt pretty damn proud.

Five kids ago I would have snorted at the thought of me running 1 mile not to mention 13.1, and if you told me that the thought of running a half marathon would get me through some of the hardest physical and emotional times in my life I’d have rolled my eyes.

I was pretty excited at the thought of not “having ” to run and train after this was done, but I think I have the bug.

I have no desire to run 50 half marathons in 50 states but…I think running every half marathon in Wyoming would be pretty cool!

All in all, this is one of the Prairie Wife badges I’m the proudest of. I can’t tell you how much it meant to me to check this off my bucket list.

To show myself I AM #strongenough

Readers that are half marathoners, I can’t encourage you enough to enter and run in the Jackson Hole Half Marathon. It’s superbly organized, with beautiful views and a great group of people cheering you on along the way! Maybe I’ll see you there next year 😉