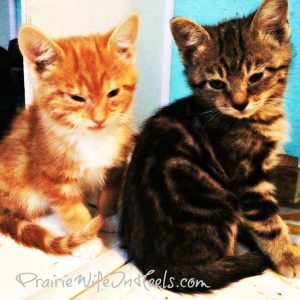 I am a self declared crazy cat lady. The reason we “only” have four cats (only one is allowed in the house) is because The Cowboy keeps a tight rein on my cat hoarding. This Fall we brought two new kittens to the Prairie. Spike and Shadow are two brothers, one is orange and the other is gray and they are both absolutely the sweetest things ever. The Cowkids adore them…and surprisingly so do our two other cats.

But, as we’ve already discussed on the blog, sometimes life on the Prairie can be rough.

Last Friday night we were sitting at the table with some close friends and neighbors as well as Ma and Pa. We had just finished a delicious dinner and were chatting when my phone rang. Our neighbors called asking if we were missing a cat. Cowboy J had mentioned earlier that Spike and Shadow hadn’t come back from an afternoon walk, and my heart dropped. It turns out that the kittens had followed the kids and Pa on a walk and at some point a neighbor’s dog had gotten out and attacked Spike.

They brought Spike to us wrapped in a towel. I assured them there were no hard feelings. After all, sometimes stuff like this happens and, our cats don’t know to be afraid of dogs because they are best buddies with Cowdog. The Cowboy and I took Spike away from where the Cowkids could see, and I began to examine him. 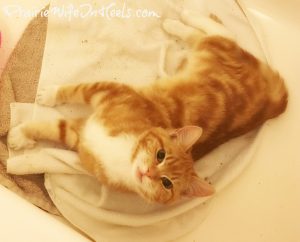 Day 1: Things didn’t look good. He was meowing pitifully and not moving his hind legs and tail. The Cowboy was all for putting him down then and there but, I all but threw myself on top of Spike and begged him to give me a chance to nurse him back to health. He rolled his eyes but said he’d let me try. We had a precious appointment set for Tuesday for both the cats to be cut so, I knew I just needed to keep him going until then…or at the very least Monday. I knew our amazing vet Kenzie would make a weekend call but it was doubtful if The Cowboy would allow the expense…

I set up a cat hospital in our upstairs bathroom in the bathtub. I knew Spike would be safe from the Cowkids and I could hear him if there was trouble. I checked him out more thoroughly and gently pushed and prodded him. He was a bit grouchy when I pushed on his back hips but not too bad. He was able to support his own weight but it was obviously extremely painful. I lifted him into the litter box and was overjoyed to see him pee. Who’d have thought I’d be so excited…but it meant that his internal organs were maybe going to be OK.

Day 2: When I went in to check on him after the night, I was thrilled to see that he had gotten up in the night to use the litter box. But, he wasn’t eating or drinking. I knew that we also needed him to poop before we were in the clear so I sat down with a syringe and some water and beef broth from our stew dinner a few days before. Every few hours I went in and fed and watered Spike, and of course offered him some love. At long last he pooped, but he was only moving to the litter box and protesting being made to stand, and his tail was definitely not working. 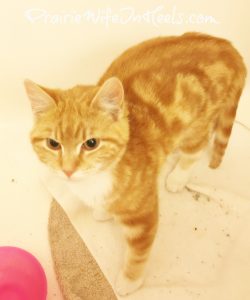 Day 3: Spike was starting to act more alert and energetic and was even beginning to clean himself (thank goodness because his tail was pretty gross). He was standing with less pain but not moving on his own unless he had to go to the bathroom. I wanted to make sure that I didn’t need to take him into the vet so I texted Kenzie. She agreed that as long as he was continuing to improve bringing him in on Tuesday was fine. That night he actually stood up and helped himself to food and water, VICTORY!

Day 4: I took Spike into the vet and crossed my fingers. He was alert and perky, was walking a few steps and obviously getting sick of living in the bathtub. I knew that we would have to maybe cut off his tail, which really was no big deal in my opinion. I prepared the Cowkids for the worst, just in case….

I am proud to say that Kenzie agreed that I should get the Cat Whisperer Prairie Wife Badge! She decided that there was perhaps a fracture in his hip and stated that his tail was not working, but still had blood flow. She felt that the best thing to do was to let him continue to heal on his own for 6 more weeks. Then we would take a look at him again and see what we wanted to do for his tail.

The time spent petting him and coaxing him to eat broth from a syringe was worth it when I was able to tell the Cowkids that Spike would be fine. The were overjoyed, and immediately ran into the bathroom to smother him with love and affection when they got home from school.

I’ll keep you posted on his progress but, I’m proud to say that this evening he stood up on his hind legs and peeked over the top of the tub! It’s the little things you know? 😉

Previous Post « Get Out of Your Winter Slump With Yoga

Next Post Beat the Winter Blues with Brilliant Baby Products »