This is my favorite Christmas memory since I became Texas Two Steppin’. I snapped the photo one Christmas Eve when the Stepkids were tweens. The kids were in the kitchen and they decided that this year they would be in charge of getting things ready for Santa. 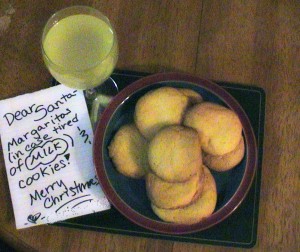 OK, here is where I need to take a minute to explain three of our unique family traditions.

1. I am certain that during the holiday season most American families gather around the television to watch “A Very Charlie Brown Christmas” or “It’s A Wonderful Life.” Not us. We’re watching–or should I say quoting–“National Lampoon’s Christmas Vacation.” Obviously we think laughing during the holidays is mandatory.

2. Many families sit around the Christmas tree to open their grand presents from Santa that are beautifully wrapped with sparkly paper and festive bows and ribbon. Not us. We gather around the fireplace where Santa had thrown a few gifts in pretty plain paper. Why are our gifts from the North Pole different from other families? Well, Santa’s a busy man who needed to get on to the next house, and he knew we wouldn’t mind if he just dumped our stuff out of the sack. Because our presents were at the bottom of the sack and bows don’t travel well, he knew wrapping paper only was the way to go. Plus, he needed to lighten the sled for Rudolph so he focused on the smaller gifts (he knew The Texan and I would take care of the “big” gifts). Basically the Stepkids grew up with a more practical view of Santa than most of their friends.

3. This one ties to the photo and the start of the story because I know you might have asked yourself, “Why are tweens getting ready for Santa?” Well, every year in October we ask the kids what they want for Christmas. We follow up this family discussion—and it is a pretty funny family discussion, asking if they still believe in Santa, because if they don’t he doesn’t need to bring anything. Funny, but even though they are in their ‘20s, they quickly answer yes.

OK, back to the story. So the kids were in the kitchen getting ready for Santa and I was in the next room, probably packing for our trip the next morning to visit relatives. All of the sudden I heard the liquor cabinet quietly opening and then shutting. Sneaking around? Stealing alcohol? Getting drunk? Not on my watch!

Because I wanted to catch the kids red-handed I waited a minute before I walked in and sternly said, “What are you two doing?” They looked up, surprisingly not nervous at all, and said, “We’re making margaritas.” They were so matter-of-fact in their response that I took a deep breath, forgot about chewing them out and enrolling them in AA, and simply asked, “Why.” They said they were talking and felt that Santa would be tired of milk with his cookies, so they wanted to give him a margarita for a change of pace. “We want him to remember our house every year,” Step Girl said with a wink. After I was done laughing, I gave them a hug and told them to call me when they were ready so I could take a photo.

Previous Post « Sometimes you Have to Prove a Point