As I answered some reader questions for Friday’s post I was reminded of an incident that occurred about four years ago. While I strongly believe that exposure to dirt and germs ends up making healthier kids, there can be too much of a good thing…At the time this was a horrible experience but, since we all know it turned out OK it has now become family lore. (Warning: if you have a sensitive stomach don’t read this) 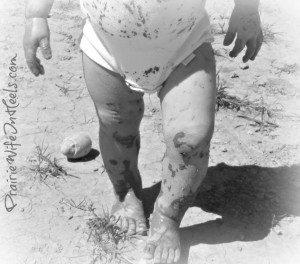 Cowgirl G had a strange love of eating dirt. As soon as she was mobile her favorite place to hang out was the floor by the front door, where she would spend her time picking clumps of dried mud and rocks out of the rug and eating them. I would then spend most of my time saying “yuck” and fishing them out of her mouth. We even began keeping our shoes out on the front porch because, she had learned that the bottom of our shoes was a gold mine of tasty dirt…ugh it was really gross! Things tapered off at about 18 months but we still had to watch her pretty carefully outside, and I shook out our front door rug daily.

One day Cowboy J and Cowgirl C were playing in our “yard” while The Cowboy and I tried to do some landscaping. I have yard in quotes because at the time it was really a fenced in clay/mud pit. We were still saving up to install a sprinkler system and sod. The kids were playing nicely and we were enjoying the lovely fall weather. It had been pretty rainy for Wyoming and it was finally the perfect day to get things ready for winter. When it was time to get inside Cowgirl G was covered in mud from head to toe. This was no big surprise with the state of our yard, and we didn’t think anything about it.

Then later that night she started to throw up, and have the worst stinky diarrhea I have ever smelled in my life. We had just potty trained her (she was ready really early) and she didn’t have any accidents but we kept her in a pull-up anyway. She had her normal appetite and attitude, and I pushed fluids and the BRAT (bananas, rice, apples, and toast) diet to help ease her tummy. At first I thought it was a normal bug and waited for it to hit the rest of the family. But after day two I began to wonder. The kids and I went into our doctor on the fourth day and had a chat about the symptoms. When I mentioned that the diarrhea was frothy and extra rank her eyebrows went up and she asked if Cowgirl G had eaten anything different lately. I shrugged my shoulders, but we both noticed Cowboy J start to wiggle and look uncomfortable.

We exchanged a knowing look and nicely asked Cowboy J if he had fed her anything that might be unusual. “Well I made her mudpies and she really liked them!” My stomach dropped, of all the things to offer her; of course she loved them…and probably ate every last bite! It turns out he had found some water that had been sitting in our empty sandbox, you know the turtle one, and mixed it with dirt and served her mud pies using his digging shovel. We had her tested for Giardia and while the test was inconclusive it was clear that the mud pies were the cause of all the trouble. While Cowboy J didn’t eat any “I don’t eat mud, that’s gross!” he was lectured sternly on not feeding any mud pies to anyone else either.

Cowgirl G got to be a pro at getting to the bathroom in time and sadly was trying to clean up her own vomit out of the sink by the end. She was so familiar with the process that she insisted on turning on the water and getting out the paper towels and Lysol. She recovered within a week and we were blessed that she never suffered from dehydration or needed to go into the hospital.

Every summer we tell the story to all the Cowkids to help remind the other kids what Cowgirl G learned the hard way. Lesson learned…Don’t eat the mudpies!

2 thoughts on "Don’t Eat the Mudpies"