Two weeks ago The Cowboy left for an African Safari…

I am happy to say that he came home safe and sound on Friday night. The snow threw him off a bit, as it was a change from the 90 plus degree weather he had been experiencing! The Cowkids were thrilled to see him and so was I. He came home to a clean house, his favorite meal on the table and a pleasant and cheerful family.

I was a bit worried about how two weeks of no help would go, and I have to say I’m pretty proud at how well we did.

I’m used to being a hunting widow, and from past experience I know that around day 5 is when we all start to get a little twitchy…and then it’s usually downhill from there.

As a precautionary measure I hired a sitter for an extra day each week. I knew it would ensure I could stay on top of my work and chores, not to mention allow me time to go for a run and release some stress. Right in the middle of his trip I planned a fun day with the Cowkids. We played hooky from school, went to the park, had a picnic, and saw the movie Boss Baby. Everyone was smiles and well behaved and it really was a joy! Having the support and company of good friends also ensured that I had some grownup time and was able to hang on to my sanity. TallGirlJ met with me a few times for playdates and dinner and my neighbor welcomed the Cowkids and I over to her house for a lovely Mother’s Day dinner.

The Cowboy was able to text and/or Facetime us every day and this eased the pain of his absence for all of us. I can’t tell you the comfort it gave me to know each day that he was safe and well. The lodge where he hunted and stayed was beautiful with wonderful rooms, delicious food, and wifi in the main lodge. 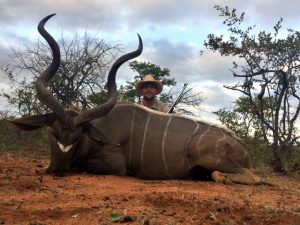 The Cowboy had a list of animals that he wanted to hunt (yes this was a hunting safari) and while he didn’t check everything off his list he did get a Wildebeest, Kudu (seen in this picture) and an Impala. The Wildebeest will become a rug for our house (mixed emotions about that), the Kudu will become a full head mount hanging on the wall, and the Impala will be a skull and horns and has been claimed by the youngest two Cowboys for their rooms.

I had lots of questions on my personal page when I posted hunting pics, and I’ll assume that you have the same ones so I’ll take a moment to talk about ethical hunting. Here on the Prairie we eat what we kill. Even if our family doesn’t consume the meat we donate it to local food shelters or give it to friends that need/like the meat. We don’t simply kill to have a trophy and we respect the animals and their environments. The Cowboy followed these same rules in Africa. They ate meat from the animals they killed at the hunting lodge and the rest of the meat was given to local villages.

While spending two weeks in South Africa They Cowboy spent a week hunting and the rest of the time he was able to get a feel for the local beauty and culture. He took hundreds of pictures of the African Bush and thoroughly enjoyed the photo safari he was able to take. He saw elephants, giraffes, rhinos, hippos, warthogs and more hooved animals than I can even begin to name! He was surprised at how secure the preserve was and also learned to respect how truly dangerous the African animals are.

When his luggage finally arrived (it was lost for two days) he was able to give four pairs of Soccer cleats to the local youth. Soccer programs offer the local youth something to focus on other than violence and drugs but, many families don’t have money to get the equipment needed to play. To be able to offer four youths in the village an opportunity to play was a big deal for The Cowboy. He also went to a local school and gave dozens of packets of gum to the teachers to hand out to their students for good behavior. The class size ratio there was 1/55…that’s right one teacher to 55 students. He said that the students were extremely well behaved and that he was pretty sure that it had a lot to do with the large metal ruler the teacher carried everywhere.

He was surprised at the political unrest that was occurring in South Africa, something that we hadn’t picked up on the news. More than one person commented that it was a good thing that he had come when he did as the country may not be safe for much longer. The Cowboy and his friend also went to a refuge camp that had over 100,000 refuges from neighboring countries. It was an experience that was shocking to say the least, and he said that it was more than a little uncomfortable.

The Cowboy was fascinated with the rugged beauty of Africa, the open friendliness of the people he met, and the exposure to another culture offered him unexpected new perspectives about our life here. He was thrilled to check an African Safari off his bucket list and happy to come home.

5 thoughts on "Back From Safari"

Previous Post « Mama Mantra: Our Home is a Safe Place