It’s nearly time for one of my favorite shopping days of the year.

Next week, I will join others on the descending staircase and make my way into the quarterly used book sale at the county library. Volunteer organizers have begun selling premium pre-sale tickets to the otherwise free event. I of course invested. 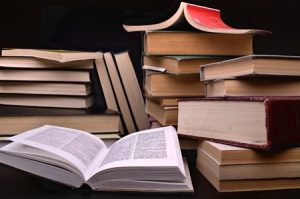 Since January 1, I have completed nine books. That’s way low, because my first effort of the year was a slog through 810 pages of difficult darkness. Although highly praised by “book people,” it was an effort that took from Dec. 26 to Jan. 27. Had it not been a gift, I would not have finished it.

Since then, I am back to popular women’s fiction, with one pleasant new discovery.

Gwen Florio is a newspaper editor in Missoula, Montana, where she was front and center in the disturbing rape coverage several years ago involving university football players.

Since then, she has written four novels, each set in a different Western state. The fourth Reservations, debuted early this month. It is fabulous. The other three, including one set in Wyoming, are definitely on my must read list.

After a couple of stupidly silly romances, luckily mostly free from BookBub, I returned to my home library in search of titles to get me through until the April sale.

I found the numbered series about bounty hunter Stephanie Plum, written by the prolific and hilarious Janet Evanovich.

No, they are not all new. I possess volumes 1 through 11 and finished the fifth in four bedtimes. There are currently 23 released, with 24 set for November 2017.

I can read about three of them relatively closely spaced together, and then I take a break. Rex the hamster and gun-toting grandma will wait for me until I return. However, I never tire of the sizzling motorcycle-riding cop or the ripped Cuban with the pony tail.

Numbers 1 through 11 have bookplates in them from the woman who was a coworker, a wonderful friend, and the mother of my man.

She too, was a voracious reader, and although our tastes were not exactly the same, she definitely knew what I liked.

Upon her way too soon passing, I was privileged to have a chance at her vast library.

And as part of my Lenten cleansing, I delivered three stout book bags full of volumes to the library for its sale. But the ones with those beautifully handmade bookplates will be in my possession forever.

What are you currently reading?

Categories: Book Reviews, Reviews, This and That, Wyo Sal