Comparing and contrasting two authors I have not previously read is, in my opinion, like trying to tell you about Santa Claus and the tooth fairy.

Reading and the pure joy of it is so deeply personal that I feel almost guilty sharing an opinion.

But then I remember that nearly every book I read has been recommended to me by someone — even if it’s a short paragraph in a women’s magazine.

So one after the other I read Inman Majors’ “The Millionaires,” immediately followed by Nicole Kelby’s The Pink Suit.

Two more different examples of relatively new literature would be hard to find. 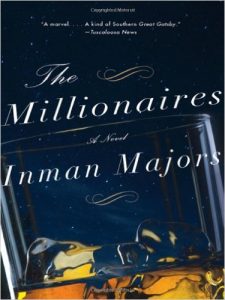 First, a short bit about “The Millionaires.” I found it at a library book sale and knew nothing of it nor its author. Note the use of quote marks around the title. There are NONE in this story of two Tennessee brothers and their associate ruined by the notion of making it big. While I vastly enjoyed getting to know the many and varied women in their lives, reading this book is WORK.

It is long — and the absence of quotation marks is really hard to get used to. I don’t know much about Southern male writers and their work (don’t judge!), except for John Grisham, and I tried to get into Majors’ head to hear his voice.

Sometimes it worked, other times it didn’t. I’m glad I read it, but it was work, with not a particularly happy ending.

As much as that was work, The Pink Suit, quickly vaulted to the extreme top of my all-time list. Although the minuscule detail of fabric and how clothes are created is not of particular deep interest to me, the overall story is completely fascinating. 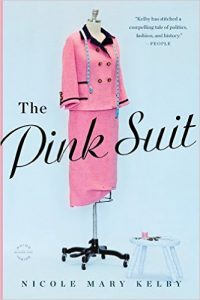 In Kelby’s words, “The Pink Suit is a novel. It is a work of historical fiction based on fact.”

It’s difficult to know at what exact moment real life becomes history. For example, I remember clearly Mom calling on the morning of Sept. 11, 2001, telling me to turn on the Today show. Bustling to get two kids and me out the door, morning TV was a luxury reserved for the weekend. When next we observe the 15th anniversary of that dreadful day, high school sophomores and those younger will read a history of something that happened before they were born.

And so it was with the pink suit. With black and white television and black and white newspapers in November 1963, I’m not exactly sure when I knew the suit was pink, but I have always known.

Chick lit, romance, Camelot, fashion, Ireland — all admirers of all of these — should read this book NOW. It is a super fast read — and that is its only flaw.

(WyoSal is a Catholic mom and grandma and works full-time at a job that still usually overwhelms her. She loves football and food and books. She hopes to win the lottery some day.)

Previous Post « What do YOU Wear With Your Cowgirl Boots?