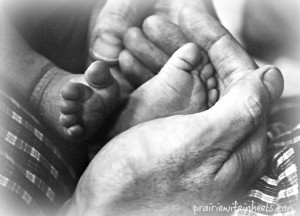 My oldest son, Cowboy J, has always belonged to The Cowboy. As I watched The Cowboy first hold his son after 19 long hours of labor the connection was obvious. I was filled with an overwhelming love for my husband in his new role as a father. When it was finally my turn to hold him I gazed at his sweet little scrunched face and waited for that zing of love. I kept on waiting and waiting and waiting… It wasn’t that I didn’t love him or want him; I wasn’t upset (well not any more than any shocked new mom) about the constant feedings and the crying. I loved his sweet little bald head, and the way he nursed in his sleep. I just knew I didn’t have that zing that he and The Cowboy had. I was filled with guilt and fear. What if this meant I was a terrible mother, doomed to fail, winding up with a teenager angrily screaming “You never really loved me!”  My fears only increased when it became obvious that Cowboy J felt the same way. He put up with me when The Cowboy was at work but, as soon as The Cowboy came home he cried until his daddy held him. My whole life I had dreamed of being a mother and now it had happened, but I had a nagging feeling I was missing something vital.

One day I was at the grocery store, Cowboy J was about 6 weeks old. I was unloading my groceries when a hacking and wheezing elderly woman (with more than a little facial hair) reached out to touch “that sweet little baby.” It was like a slow motion action film; I screamed “Noooo!” and flung myself over the car seat blocking her plague covered hands, taking the “bullet” for my baby. She took a stumbling step back and I mumbled apologetically about a rare autoimmune disorder (I know it wasn’t nice to lie), and quickly pushed him past the register. Finally my mother bear instincts had kicked in, I had my zing. Sadly it was at the expense of a little old lady, but that’s how it goes I guess.

Then he turned 6 months old and started to say “Dada.” The Cowboy was so proud! I tried not to be jealous; after all I was the one who had spent the last 6 months getting up for all those late night feedings (and had spent hours trying to get him to say Mama). I knew that Dada was easier to say and that my turn would be coming. Then about 3 weeks later Cowboy J started to say our cat Toby’s name. I was crushed. Anytime the cat walked into the room he would shake his whole body and flap his arms and squeal “Tu Tu!” I tried to be brave but I couldn’t help but wonder if this was another sign of my failings as a mother. Finally at 8 months he began to say “Mama” it was only when he was really upset and crying but hey it counted right?

Fast forward to the birth of Cowgirl G. This time, as I held my sweet baby just moments after her birth I felt that instant zing, my mama bear instinct was there and ready instantly. I mentally sighed with relief; it must have just been the trauma of being a mother for the first time that delayed my bonding with Cowboy J. Things went along normally with Cowgirl G, other than the fact that she wouldn’t let The Cowboy near her. She was my little girl and wanted nothing to do with him. It felt good, I had been so concerned that there was something wrong with me when Cowboy J preferred his daddy so strongly over me. Now, I knew it was just a personality difference. I’m sure you can imagine my joy when at 6 months old Cowgirl G began saying “Mama” and refused to say Dada for two more months. She actually said “ba” for her brother before she said Dada, I tried not to gloat.

Cue the birth of Cowboy W. Once again I watched as The Cowboy held our newborn son and instantly bonded. When it was my turn I held him and waited for my zing…nothing. As we sat alone in our hospital room I looked at The Cowboy and spilled my guts. I had never really expressed my hurt about Cowboy J. This time as I held my beautiful baby boy, I knew that the bonding would eventually come, but I still felt like a bad mom.  Imagine my surprise when The Cowboy met my tearful confession with relief! It turns out that he had been carrying around guilt because he hadn’t bonded with Cowgirl G in the same way he had with the boys. We both felt so much better, either we were both totally normal or totally messed up, but we were in it together.

It has been a big week here around the Prairie Homestead. Cowbaby’s two front teeth broke through after weeks of crankiness and he is in the beginning stages of crawling, and even pulling himself up to his knees. And, finally, two months after he said “Dada” he said “Mama” for the first time. It was of course when he was crying, and I can’t get him to say it again no matter how much I beg. But you and I both know, it counts!