Prairie Wife of the Week November 8, 2013 (Child with Special Needs)

My friend Chasetity’s little boy is one of Cowboy W’s buddies. They were born only a few months apart and both boys share a love of cars, tools, horses, and rides on the four-wheeler with daddy. The only difference is, Chasetitiy’s little boy is developmentally delayed, resulting in an inability to communicate with words. Read her candid interview with me, I’m not going to lie there were some tears from both of us as we talked. Her love and loyalty to her family, and her determination to find ways for her son to succeed in life, make her our Prairie Wife of the Week. 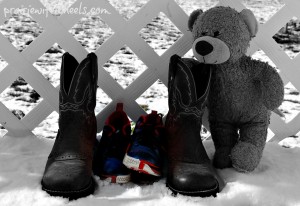 Prairie Wife (PW): First tell us a little bit about you and your family.

PW: When did you first start to become concerned about your sons development?

C: I had noticed he wasn’t making many sounds and he still wasn’t pulling himself up or trying to walk even though he was a year old, I shared my concerns with our doctor. He recommended that we take him for a developmental screening. We went to our local Child Development Center (CDC).

PW: What were the first steps that they took?

C: At the screening they said his fine motor skills weren’t as developed as they would like. They also had us sign him up for once a week home visits to help work on his speech. They really didn’t seem concerned at all about his delays.

PW: When you were told not to worry were you relieved, or did your gut tell you something else?

C: My gut has always told me something else. I know it sounds crazy, but even when I was pregnant I always had a feeling that something was different. Then when he was born and we were told he had a higher pallet than normal. I thought “O.K. that’s what it was” and I let myself relax. Then he got older and continued to grow, and I just always had a feeling in my gut that we were missing something else. Now as I Iook back, I can see that he didn’t babble as much as other babies do. I think having the big age gap between him and his sister made it harder for me to notice a difference.

PW: When you moved to a new town, and took your son to a new CDC, how did you feel when they validated your concerns?

C: First, it amazed me how this CDC offered him so many more therapies than we had ever been offered at the old one. They tested him so much more thoroughly, and I feel that this allowed them to fine tune his therapy to his specific needs. It made me feel hopeful that they validated my concerns. I know that we are on the right path to diagnosing what his delays are, and through that we can help him to grow in new ways.

PW: What growth have you seen in your son over the last year?

C: I have to say he is making way more sounds, and he has really started to point to things that he wants. Hey tries to communicate with us, and even takes our hands to show us what he wants. His frustration with others and himself has decreased, which means he has fewer meltdowns. Both his fine and gross motor skills have drastically improved.

PW: What frustrations do you still have?

C: Transitions from one activity to another are really hard for him, he often has meltdowns. I have noticed that when he gets hungry and we aren’t at home he has trouble communicating what he wants, and we all know what a hungry 3 year old boy is like! Also, sometimes it is hard to know when he is tired or over stimulated, I have to really pay attention to his cues. We have recently taken him to be tested by two doctors and we are waiting to hear the final report of what they feel his “diagnosis” is. The waiting is killing me!

PW: How do you feel having a child with developmental delays has impacted your marriage and your daughter?

C: Sometimes it can be hard to get my husband on board with me. It has been a process for both of us to acknowledge that our son may not be able to do all the things we had hoped for him. I came to terms with it earlier than my husband, so that has been hard. We both love him so much. I just know that there are things that he wants to do with our son, like shooting and hunting. I’m sure it’s hard for him to not know when, or if they can do those things together. I don’t think that my daughter really knows that her brother is different from any other child. She just accepts him for who he is. That’s been such a joy for me, I’m so proud of her.

PW: I know that he has brought so much joy to your family, can you talk about some big moments that you have had together?

C: When I think of my son I think of happiness and love. He is the sweetest boy and his constant kisses and snuggles bring me such a sense of peace. When he gets excited about something and does this big deep belly laugh, it just makes you laugh right along with him. He loves to tease and play tricks and when he is being naughty; his laugh just comes right up from his toes.

PW: When you are out in public and he gets frustrated how do you wish people would react? What do you want people to know, and share with their children?

C: Because looking at him you can’t tell he is delayed it can cause some problems. People talk to him and when he only responds with a smile I don’t know what to say. Do I explain he can’t talk? Or just say he is shy? When he is having a meltdown I would personally prefer to be left alone, though I know this might not be how everyone feels. There isn’t anything you can do to really help; sometimes I don’t even know what I need to do to fix the problem. Just please let me pretend that no one notices and get things taken care of as soon as possible. If you see a child having a meltdown in public simply saying to your family, “That’s too bad that they are having a rough time” in a kind and understanding voice, is all that’s needed. If your children are having a play date with a developmentally delayed child I think honesty is the best policy. Tell them what to expect and the best way for them to react. For my son, my friends just say “Remember he has trouble talking and can get frustrated. Be kind and use your words and if you need help ask me or his mom.”

PW: What is the best way that your friends can support you and your family?

C: Just accepting him for who his is and including us in the same activities you and your children do. He is a regular little boy who loves to play outside and watch and learn from other kids.

PW: What are your hopes and fears for your son’s future?

C: I have to be honest that I have more fears. I hope that one day he will start speaking words. My biggest fear is that he won’t be able to do things that other kids can do independently. Like enjoying school and starting kindergarten at a regular school, and playing team sports.

PW: Any last word of wisdom for the other Prairie Wives out there?

As our Prairie Wife of the Week Chasetity will be responding to your comments and questions all week.

2 thoughts on "Prairie Wife of the Week November 8, 2013 (Child with Special Needs)"