It was January 2014 and I was 8 1/2 months pregnant with the future LittleMissH. I’m the first to admit that I was feeling a bit weary. The physical wear and tear of being 40lb heavier (I can’t even claim it was all belly) and growing another life while running around after four other Cowkids was getting to be a bit much. Add to that the fact that Cowboy C was still getting up several times a night, and a few extra hormones, and I admit I wasn’t my normal chipper self. The Cowboy dealt with my less then pleasant attitude by continuing to stay on the road five days a week and keeping his head down when he was home.

At some point that Winter, The Cowboy brought home two new horses and two mules. The new horses were for our family, and the Cowkids were ecstatic. We put them in the corral with our other two horses, two draft horses and yet another mule we were already babysitting (that’s seven hoofed animals now). After a bit they were all getting along great. The two new mules were merely visitors, we were keeping them for The Cowboy’s sister. They needed to be separated from the other animals. So, The Cowboy set them up in a round pen a bit away from the corral. This meant that we (really meaning me because I feed all week while The Cowboy is gone) needed to put hay in a wheelbarrow and string out a hose to fill up buckets of water. 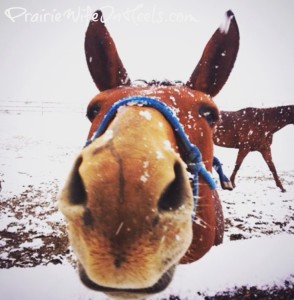 This was a pain in my ass for several reasons. Not only did it take me twice as long to do chores but, as the weather grew colder and my girth continued to expand things got harder. I had to drag the cumbersome 70 foot hose in and out of the shop when I needed to water so it wouldn’t freeze. The buckets of water would freeze each night and trying to heave them around and knock the ice out was resulting in my poor unborn child hearing more than a few inappropriate words. This went on for a few weeks.

My rage and fury at the mules grew every day. It didn’t help that the mules weren’t the least bit grateful…they would buck and snort each time I waddled up to care for them. My fear of being trampled as I went into the corral to empty the buckets of ice made my blood pressure soar and I became sure that I would develop preeclampsia . Each weekend when The Cowboy came home I would tell him how I was done with the extra chores. I explained that it was too much for my weary body and soul…he would just give me a hug and tell me that I was tough and he knew I could handle it.

Then we had a week of -20 degrees Fahrenheit and almost two feet of snow (I swear that’s how much it was though The Cowboy says it was only a foot). 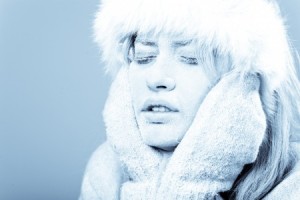 While we were here freezing in Wyoming, The Cowboy was in Arizona “on business”. I called him after two days of nasty weather, and explained in no uncertain terms that I was suffering from extreme fatigue and frostbite and that if the mules weren’t leaving soon I was going to shoot them in the head with a shotgun. His response was that he was unable to do anything from Arizona and that I needed to suck it up and deal with it…

In the end The Cowboy came home, loaded up the mules and all the Cowkids, and delivered them (the mules not the Cowkids) to his sister.

Now we can laugh about my Mule Rage…a year later….

I guess it just goes to show you, what sucks now will eventually make a good blog post!

Note: I actually might still be a little bitter as just looking at the picture of the mule above pissed me off…but I have high hopes that Poncho The Christmas Mule will help me to heal…