Anyone that has had a baby, or knows someone that has recently given birth, knows about the dreaded baby brain. As a mother with a small baby you find yourself in the middle of telling a story, staring at your friend’s raptly listening face, having no idea what you were talking about. Or, you go to pick up your child from preschool, when a well meaning friend points out that your shirt is on inside out. And you realize that you have just spent the last three hours running around town looking like an idiot. It always hits at the worst moment. Like when the office assistant at the doctor’s, asks for your child’s date of birth, and you give the wrong year not once, but twice. I was reminded of the following story when I went to the grocery store today with two friends of mine that have yet to experience baby brain. I hope that in the future they will think of this story and feel better about themselves…and that it helps someone today to feel a little more normal, or at least give you a good laugh!

Cowbaby was about 5 weeks old when I found myself needing to go to the grocery store on a bitterly cold and snowy day. After 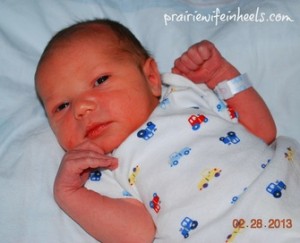 dropping off the two older cowkids at school, I headed to the store with Cowboy W and Cowbaby. Just as I pulled into the parking lot Cowbaby began to fuss. Being an experienced mother of four, I knew that it would be best to just nurse him in the van and then put him in the sling, where he would remain snug and content while I quickly got a few necessary items. I pulled Cowbaby out of the car seat and unbuckled Cowboy W. Cowboy W contentedly ran around inside the cozy warm van playing with whatever random toys and books he found. As I settled Cowbaby in my arms I realized that he had pooped through all his clothes as only a newborn can. No biggie, I simply pulled an extra set of clothes out of my diaper bag and changed him. By now he was getting a little angry so I “quickly” nursed him while chatting with Cowboy W. Cowbaby was still pretty little, and nursing at this point takes at least 20 minutes, so just as he was finally finished I was more than a little irritated to hear him poop again.

Such is life with a small infant; I put myself back together and began to change him on my lap. Cowboy W was beginning to be bored with playing I spy, and I was getting a little frustrated myself.  I turned around to talk to Cowboy W and was instantly brought back to attention by a wet stream and a loud cry from Cowbaby. Because of my pause in diaper changing; the baby, my shirt, and a good half of my van’s dashboard were now covered in baby pee. I tried not to say too many bad words as I wiped down the baby and grabbed another set of clothes for Cowbaby. By this time well over half an hour had passed and I was over it!

I placed Cowbaby in the sling and grabbed Cowboy W and we ran for the store. Once inside I zoomed around quickly glancing at the list and throwing items into the cart. Cowboy W took advantage of my distraction and added a few extra items into the cart, but at this point I didn’t really care. We pulled into the checkout lane with no more problems, and I heaved a sigh of relief as I took the receipt from the cashier (Rita at Safeway is THE BEST) and headed towards the doors. I paused in front of the exit and zipped up Cowboy W’s jacket and rummaged through my purse for my keys. With the winter weather waiting I knew I needed to get the boys tucked into the van as quickly as possible.

I was suddenly struck with a cold fear as I was unable to find my keys. I patted my pockets and dug through my purse a second time, no keys. Then I heard a voice I recognized from my children’s school. A friend of mine who was due soon with her third child said “I am so happy to see you here with your kids; you give me hope that I can handle another one too!” I sheepishly smiled at her and explained that I had a sinking feeling that I had locked my keys in my car, and that perhaps holding me up as a standard was not the best idea. She kindly offered to drive by where I was parked to make sure all was well, and I headed to the parking lot with my cart and two cowkids.

Now, in the end it turned out that I had not locked my keys in the car, nope not at all. I had left the keys in the ignition with the car running, and the heat blasting. Apparently in my rush to get into the store and done with my errands, I had completely forgotten to remove the keys and turn off the car. Baby brain had struck again! I said a quick prayer of thanks that I lived in Wyoming. Only in Wyoming could you leave an empty unlocked car in the parking lot, for half an hour, and have it still there when you returned. I smiled and gave a thumbs up to my friend as she drove by, and buckled the kids into the very toasty warm van. As I drove home I seriously debated ever sharing this story with anyone else. In the end the opportunity came up later in the week when a girlfriend needed to feel a little better about her mother skills, so I offered my story to her in the hopes that she would see that forgetting diapers wasn’t really that big of a deal.