30 Miles in the Wyoming Backcountry in Three Days 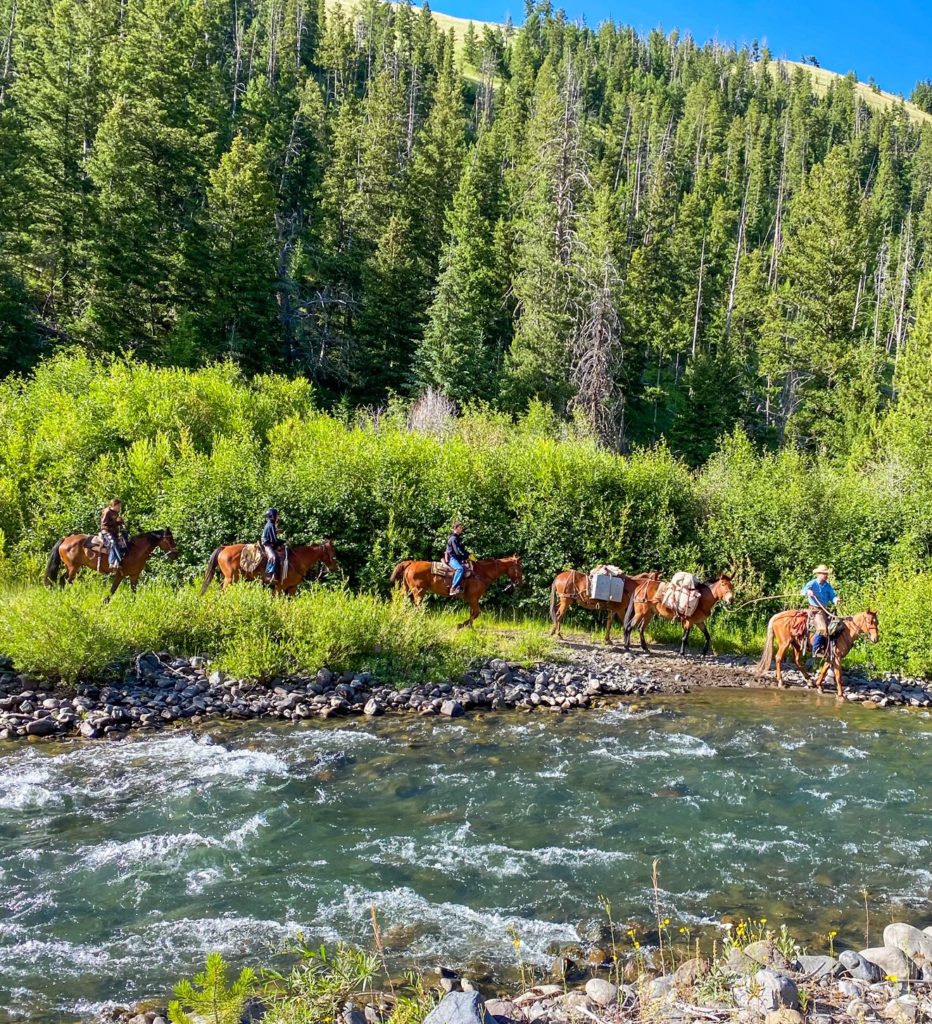 I can say with confidence that I have earned my Wyoming Backcountry Prairie Wife Badge this last weekend.

In case you missed my announcement last week, The Cowboy and our three oldest Cowkids (14,12 and 10) went on an adventure for a few days.

We packed up four horses and two mules, and our two dogs and headed into the Northern Wyoming Backcountry. 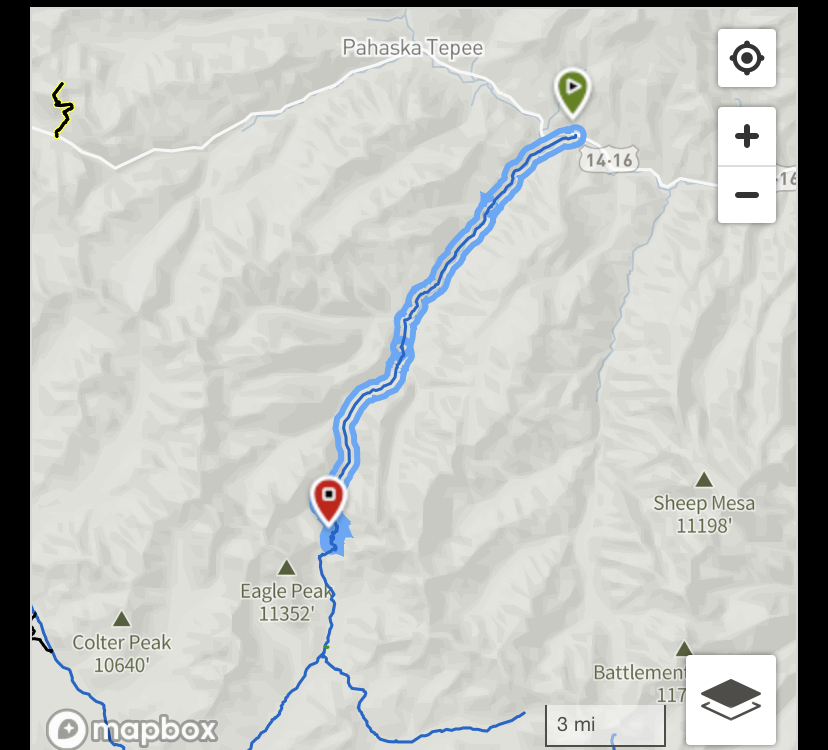 We started at the Eagle Creek Trail Head located outside of Cody, Wyoming, and traveled in 10 miles to camp at Eagle Creek Meadows.

The next day we hiked around 10 miles (a bit more than 5 miles up and then back down) to Eagle Pass which is actually on the boundary line between Shoshone National Forest and Yellowstone. 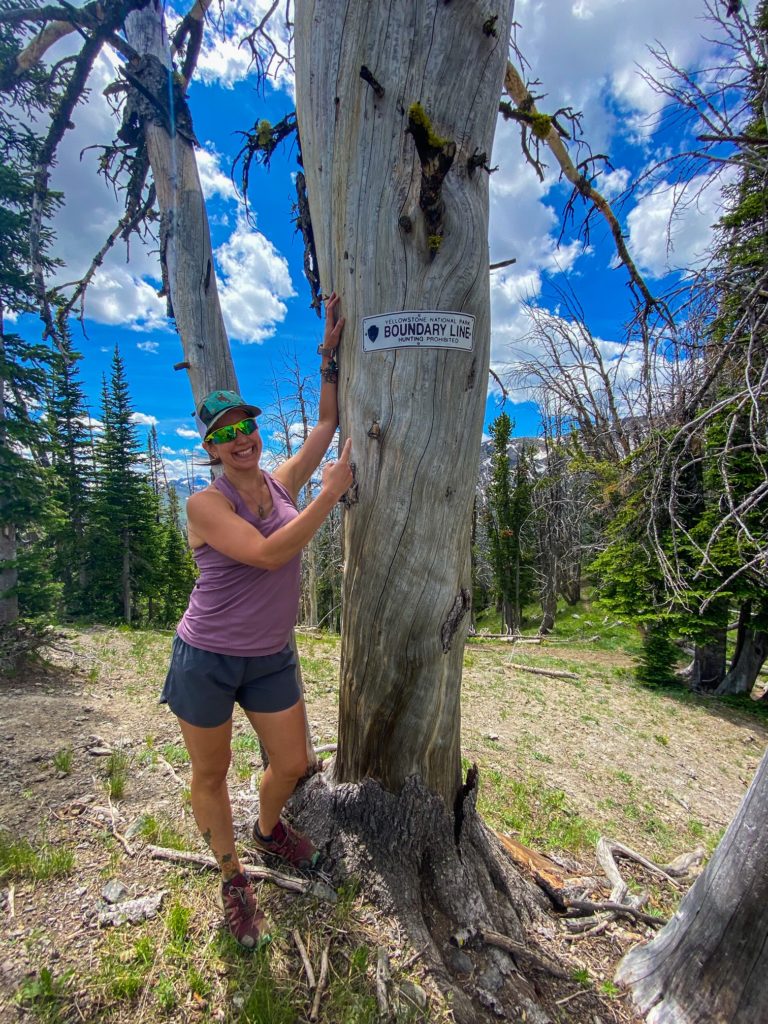 Then on day three, we headed on out and back to civilization (10 more miles).

The Cowboy and the Cowkids road horses while I hiked the entire way, 30 miles through the Wyoming Backcountry.

I used to ride, but haven’t been on a horse in 5 years (I promise one of these days I’ll tell you why) so for me this trip was a bit of a test of endurance, both physically and mentally.

This area is known for it’s many “creek” crossing but between you and me it was more like a river with the water almost up to my waist and a current that tried as hard as it could to knock me over. 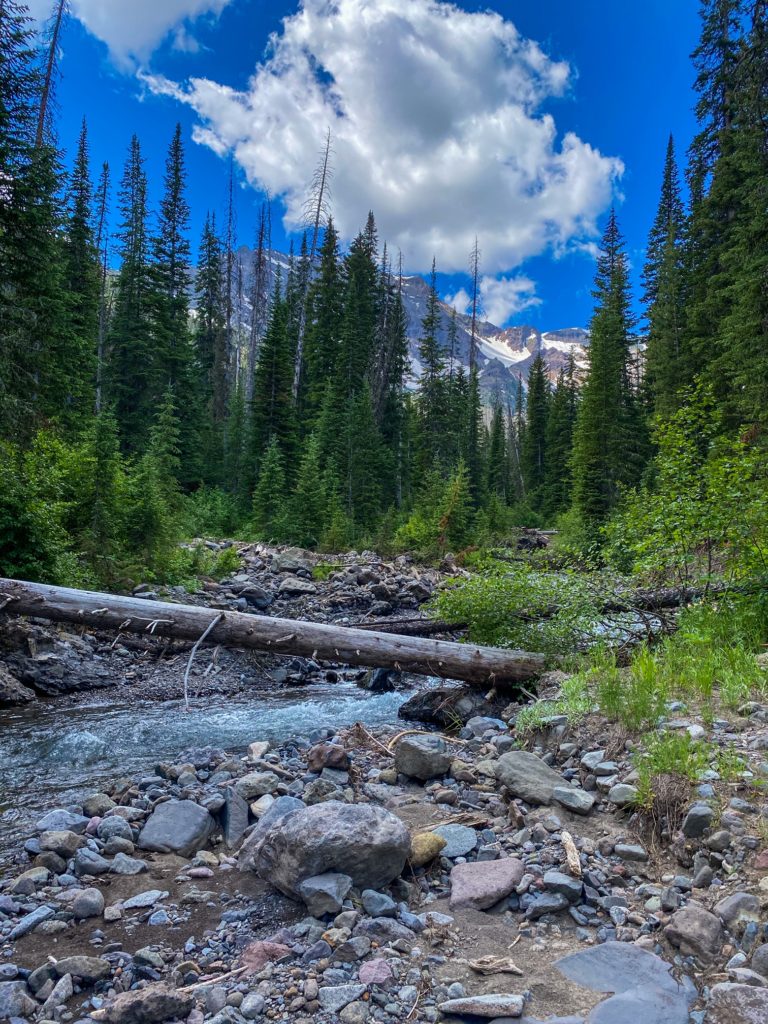 Each day resulted in around 6 crossings for me so by the end of the trip my feet were a bit banged up.

But, oh my those views, it took my breath away. 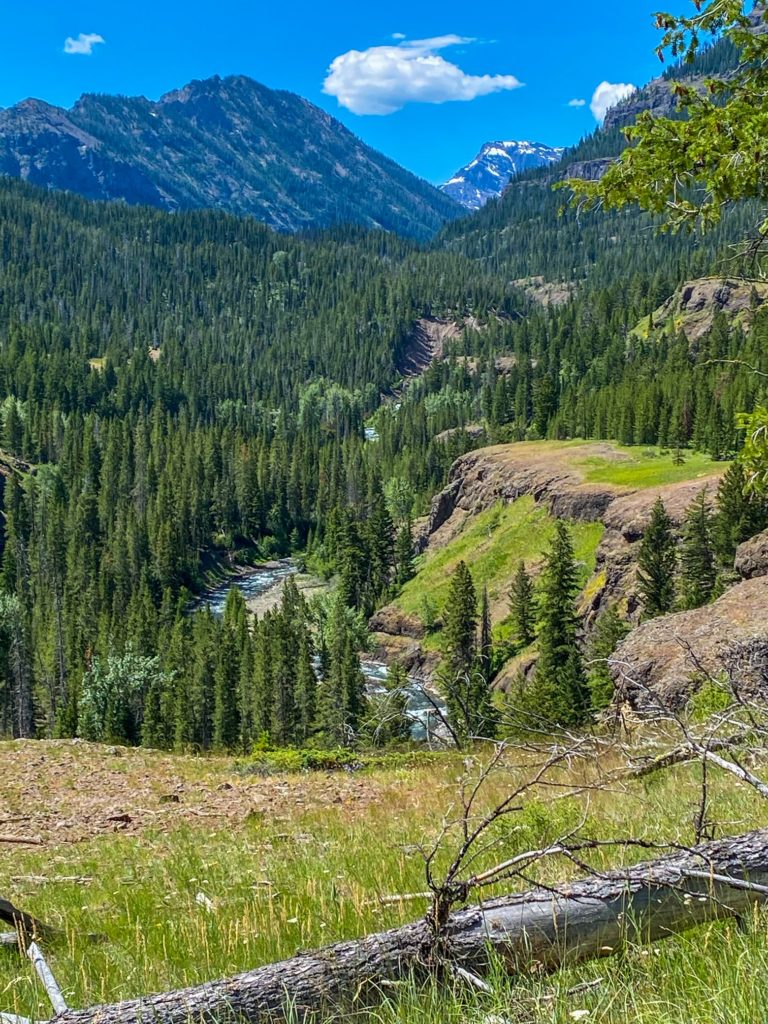 Meadows filled with wildflowers and lush green grass up to my armpits. 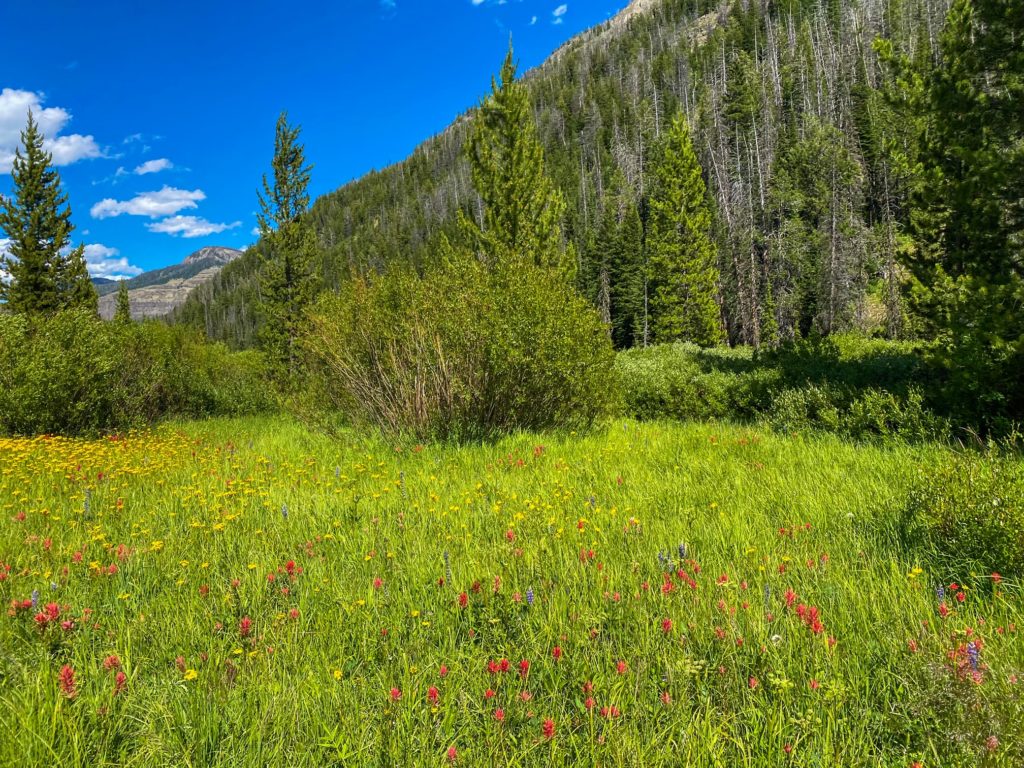 We camped in a meadow that had a creek where the Cowkids caught fish. 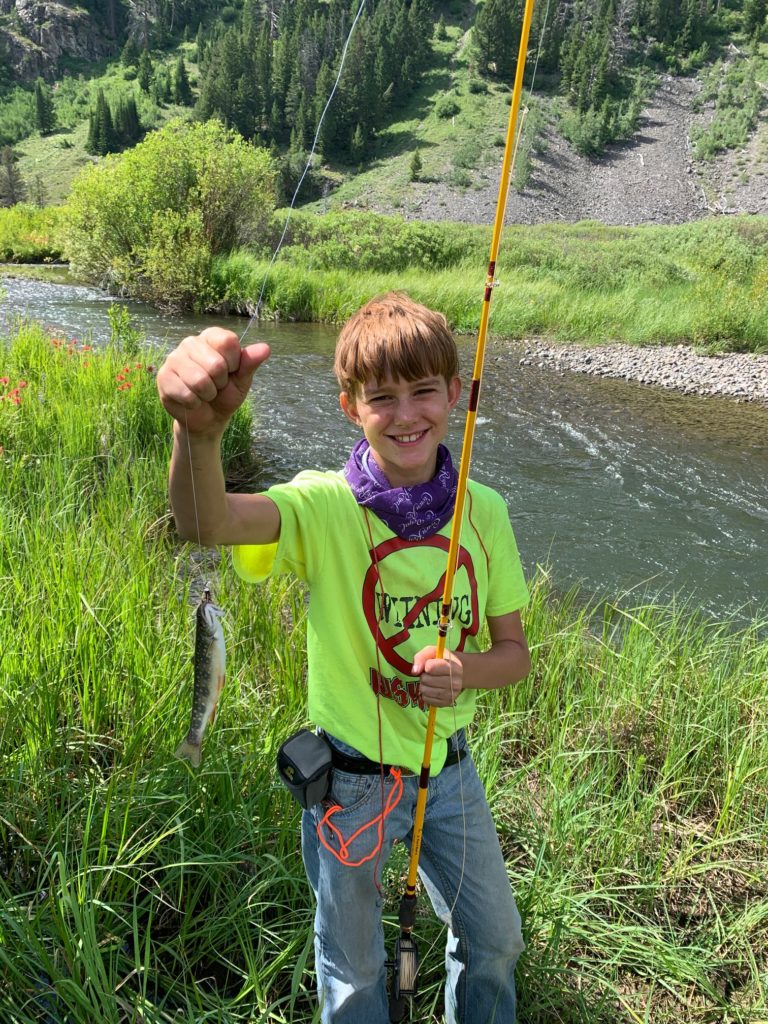 The water was fine to drink after we ran it through a simple filter and the Cowkids loved the adventure of going and getter water each morning and evening. 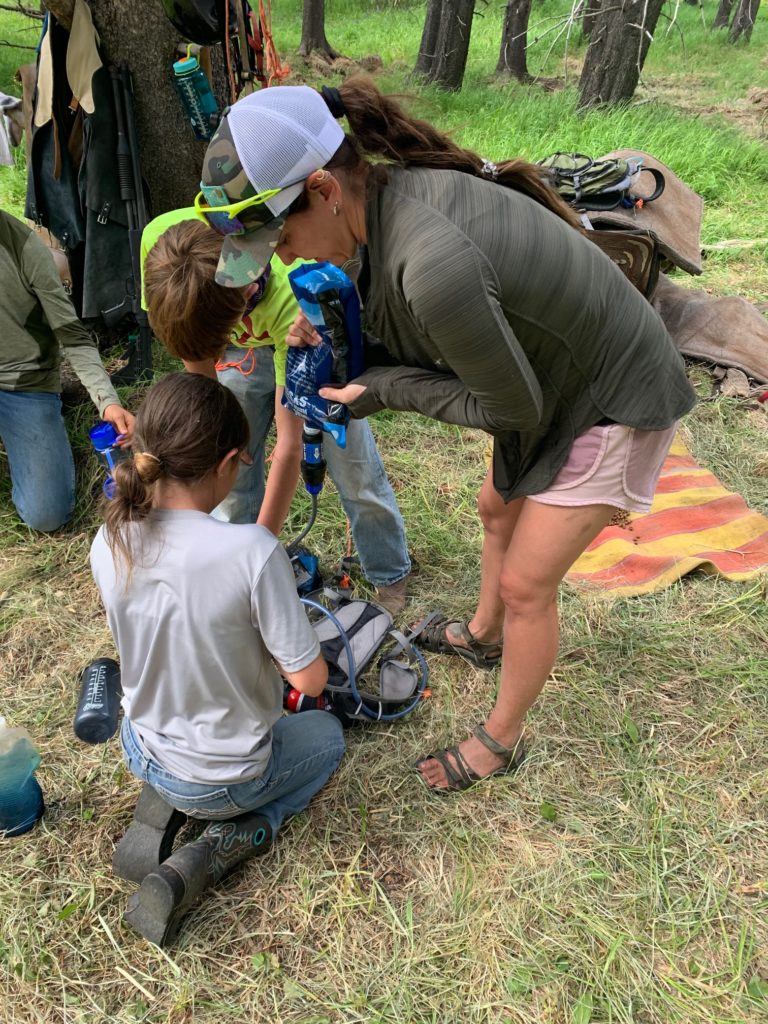 We cooked simple meals over a campfire (and yes we had S’mores) and were so tired that we went to bed the same time that the sun went down…okay fine I also crashed and took a quick nap whenever we got back to camp each day. 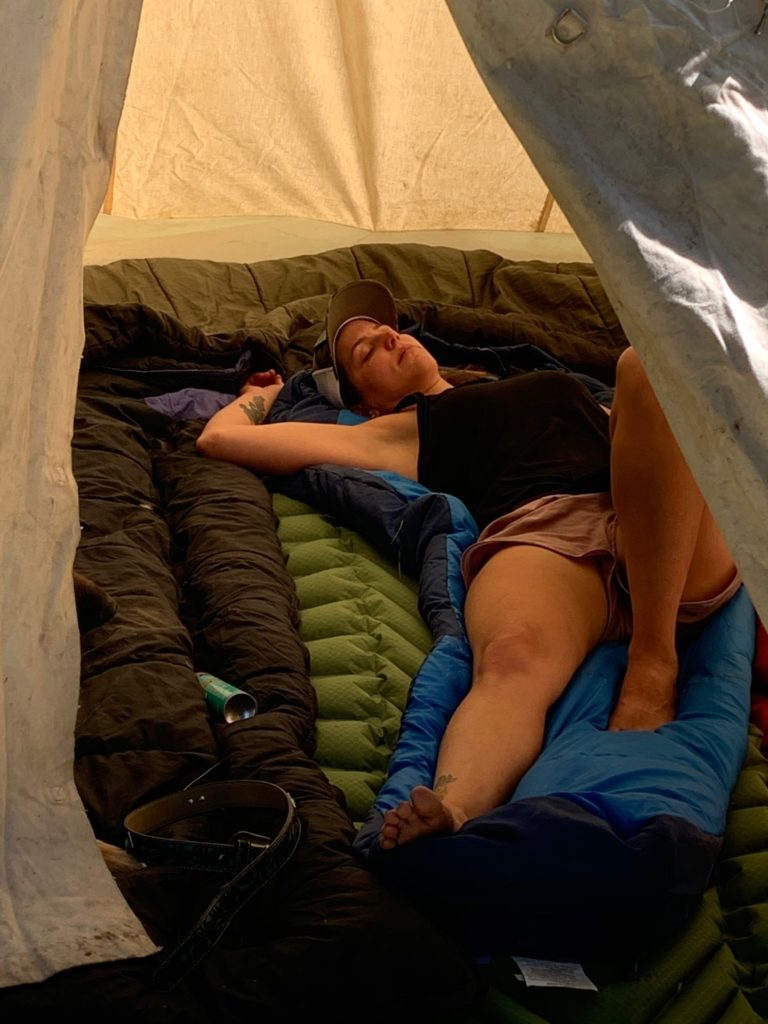 On our second night the Wolves denned up nearby began to howl, and the sound was beautifully primal.

The next morning I learned that they actually howl whenever they want and we giggled as we heard the young wolf pups trying their best to chime in.

We knew that there were multiple wolves near where we were in the Wyoming Backcountry. After all, we had run into many of their tracks (as well as their scat) along the trail. 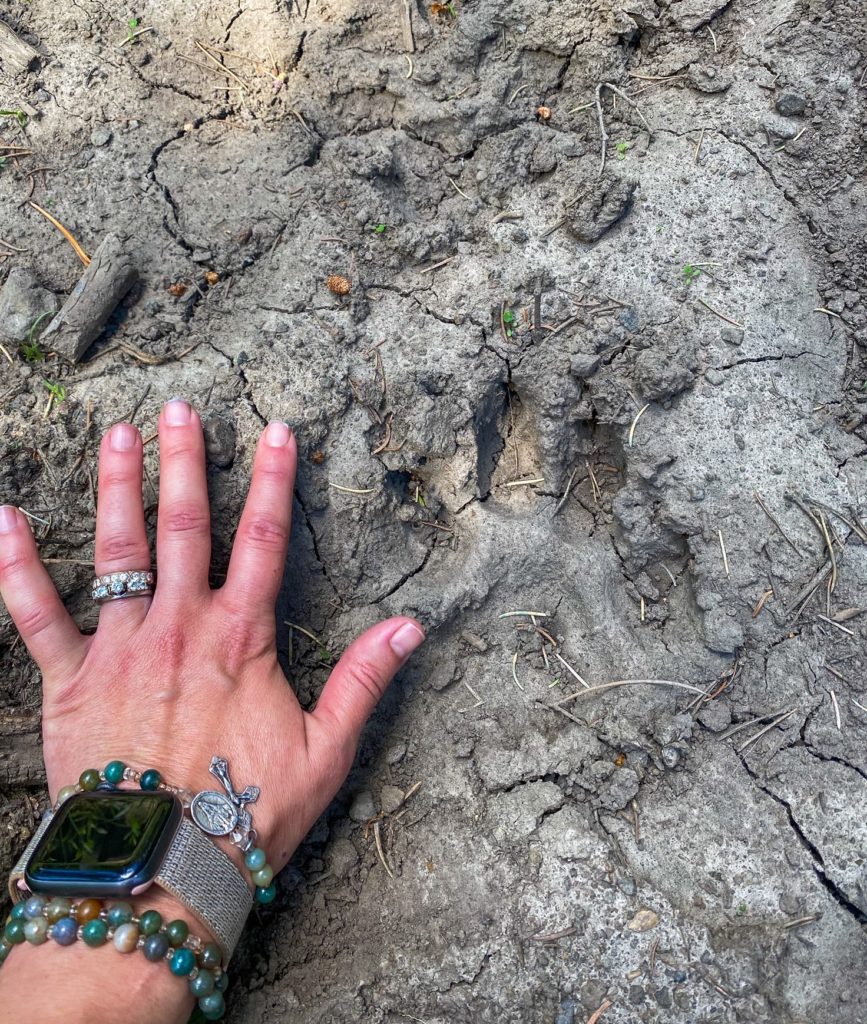 We, also knew that Grizzly Bears would be around and found too many tracks to count.

For some reason, the Bears also love to poop right in the middle of the trail!

Despite my past experience of Elk and Deer hunting throughout Wyoming, living in Cody in the past, and hiking all over the place I had yet to ever even see a Bear.

Lots of prints and poop…but never an actually Bear.

Both The Cobwoy and our oldest son had seen multiple Grizzly Bears through the years (one even took most of ours son’s Elk he shot last year) but frankly, I was just fine keeping up my streak of never running into one.

As we rode and hiked out on our last day we came across an outfitter on his way in, we didn’t think anything of it, moved to the side and let his pack string through, and then went on our way.

About 10 minutes later The Cowboy stopped us and pointed out this track.

He mentioned that is was 10 minutes old and that we need to be aware that the Grizzly was traveling ahead of us.

When I asked him to share his mountain man knowledge he explained how he knew.

First, the track was in the dust, yet despite the wind, it was so clear that we could see the lines in the Bear’s pads.

This meant it was fresh.

Second, he noted that it was on top of the mule tracks left by the outfitter traveling in the opposite direction that we had seen about 10 minutes ago.

We headed down the trail a bit more aware but in the same formation we had been in the entire trip. 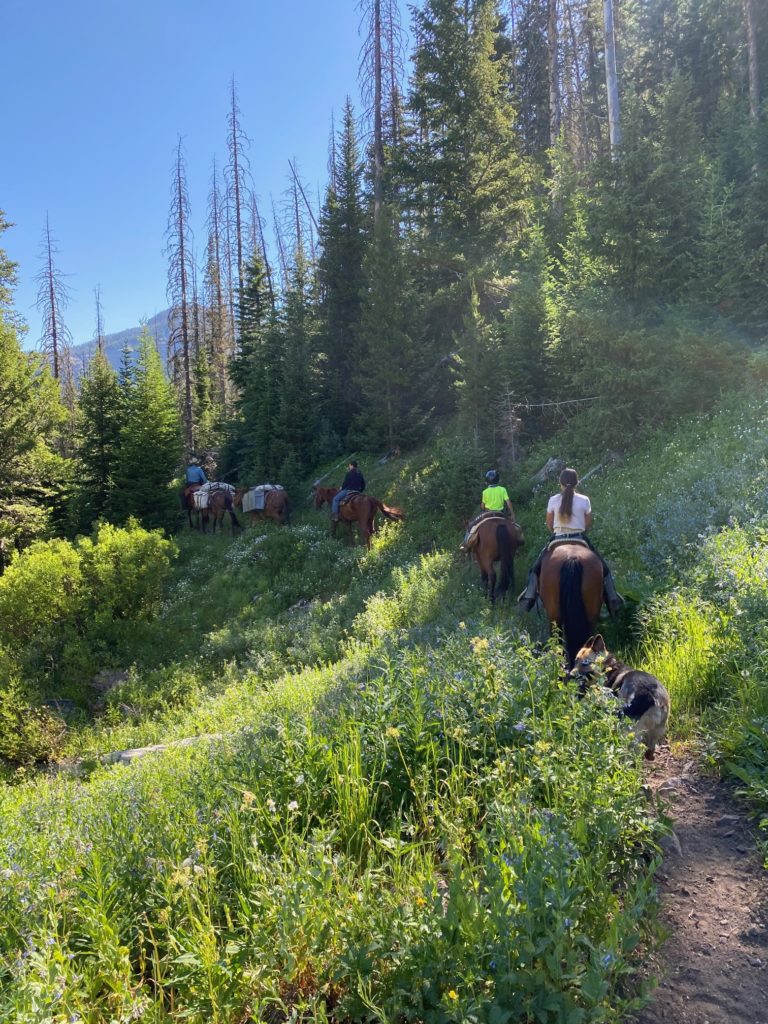 Our dog Zip was in the lead to scare animals off the trail.

Then it was The Cowboy and two mules packed with our gear.

Our oldest son was next, followed by our 10-year-old son, and our daughter.

Next in line was my faithful dog Sammi (she had stayed right by me the whole trip) with me running drag. 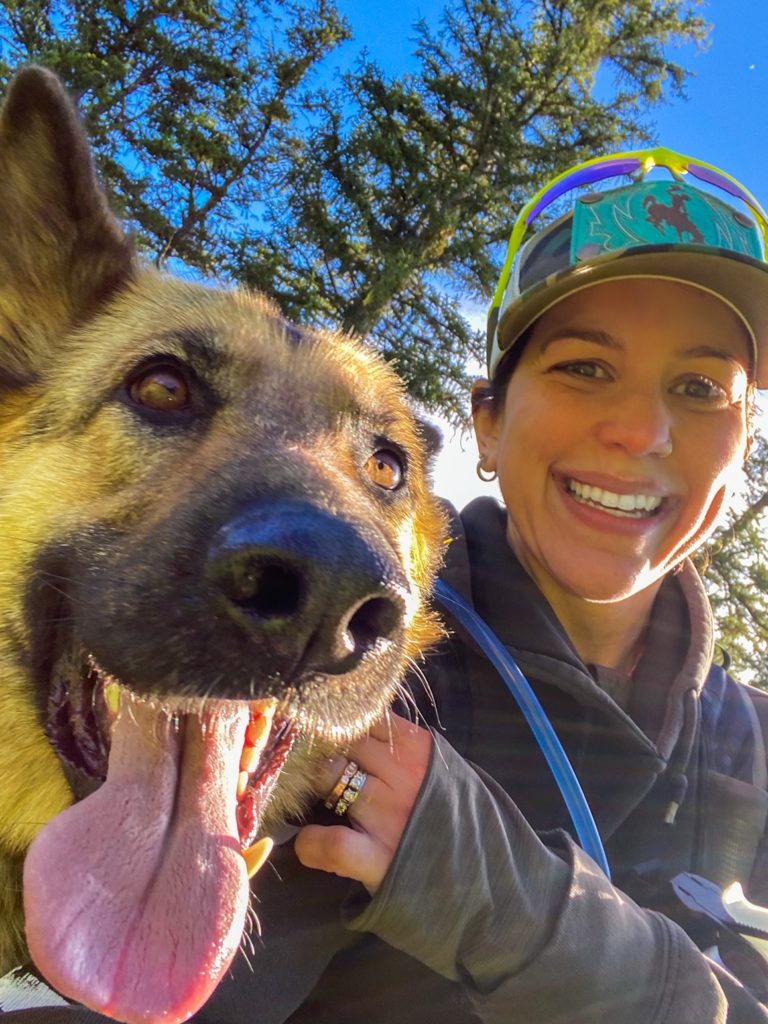 We made a bit of a ruckus even if we weren’t trying too and I tended to stay a bit farther away from it all to avoid the dust, horse poop, and any chance of getting kicked.

There were even times when I lost sight of them entirely, but I never worried.

Suddenly as I was gazing to the right of the trail admiring the scenery I heard a “Woof” come from my right side perhaps 3 feet or so off the trail.

I stopped and immediately recalled The Cowboy describing this “What’s going on” noise that Bears often make.

I loudly called out  The Cowboy’s name followed by “I think I just heard a bear!”

Everyone stopped immediately and in the quiet, I heard the noise again “WOOF!”

My daughter turned around on her horse, and her eyes were as wide as saucers.

I knew that it wasn’t my imagination after all and I screamed out “Yup it’s a bear!”

The Cowboy said “Go Go Go” and everyone picked up speed.

I ran as fast as I could (though of course, I couldn’t exactly keep up with the horses) and debated if I dared to turn around and see if the Bear was following us.

In my head, the scene played out like a movie.

If I turned around I just KNEW it would be a fatal error.

Sure, I would know if a Bear was after us, but I’d also trip over a rock while looking behind and fall and get eaten or at least mauled.

If I kept my eyes straight ahead and focused I’d be able to get away, yet never know if the Bear had decided to follow us.

I chose choice B, kept my eyes focused ahead, and got my booty as far away as I could!

This trip through the Wyoming Backcountry was absolutely one of the most amazing things I have ever done.

The memories we made will be precious to all of us, and I am so thankful that The Cowboy took the time to take us, and to pass on his knowledge and love of Wyoming on to our children. 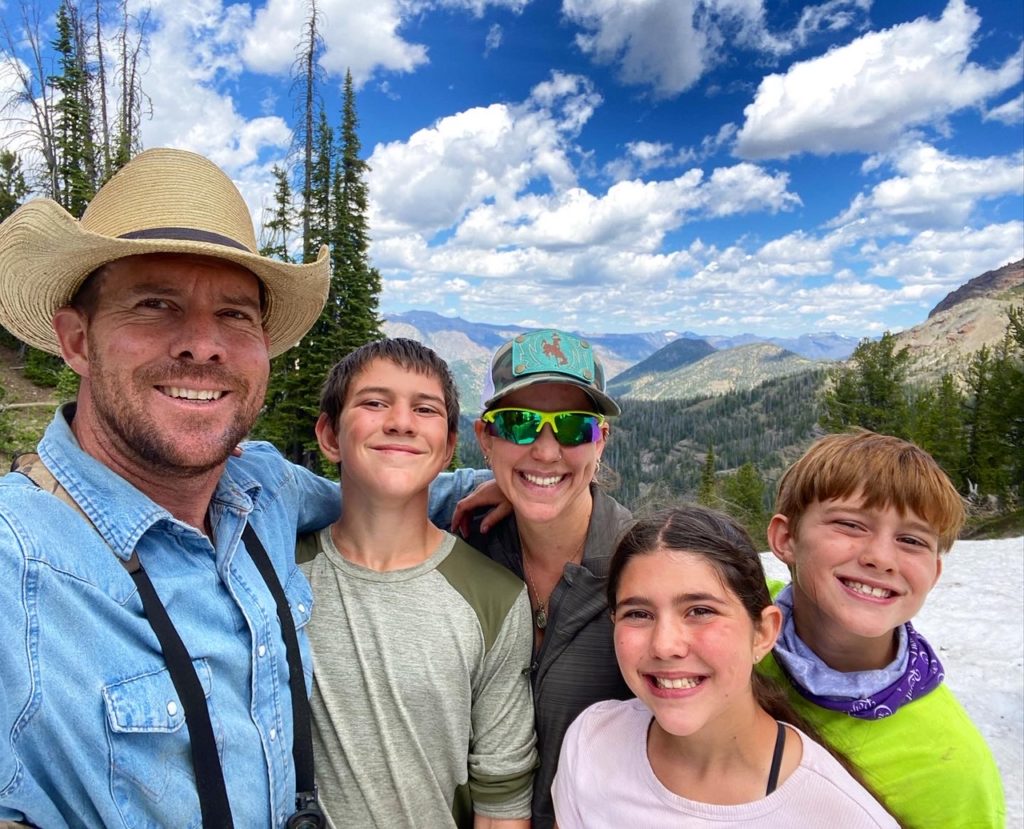 NOTE: The two littlest Cowkids stayed with their beloved Aunt and were spoiled rotten during the trip. It wouldn’t have been safe for them to go on this adventure.

Previous Post « The Mountains Are Calling And I Must Go