Wyo Sal: She was ‘Humble and Kind’

It’s difficult to recap a memorial service when everyone in town was there.

But there are lessons to be learned from a life devoted to others, so I am happy to share.

Of all of the places that she worked and spent her time, the football field at Glenrock High School was Mary Kay Kindt’s favorite.

She was always on the track behind the home team bench, separated from her son, an assistant coach, by a cyclone fence. When things were going well, she leaned against the fence in her “Coach’s Mom” authentic jersey and took photos with her long-lense camera.

When things weren’t going as well, which wasn’t very often, she paced, back and forth, back and forth. But she always had a smile and a hug for the hundreds of kids who stopped her. 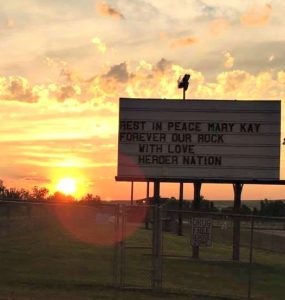 One said she was always positive, and in spite of the good she did for the community, always put her family first.

Another said she was a bridge from the school to the community. The school Facebook page she created was the “envy of schools much larger than ours” throughout the state, he said. And he said that the amazing community support shown to the schools was not an accident, but something she worked to build.

And one said that in all of her efforts, she gave the same advice — “always know the why,” which meant simply, always know why you do something, and or who the effort will benefit.

Her pastor talked about her spiritual side, a side perhaps not known to as many of the folks she came in contact with in her paid positions as the executive director of the town’s chamber of commerce and a bus route driver for the school district.

A tailgate supper preceded the service, just as the hundreds that she organized throughout the years preceded kickoffs. Friends and relatives made huge roasters full of sloppy joe’s and hot dogs, and community members donated water, chips and cookies. Within 30 minutes, all slots to donate items were filled, with others begging to help in some way.

Athletes, past, present and future, filled the town fire trucks and were carried through town to the stadium, lights and sirens blaring. During Homecoming Week, Mary Kay orchestrated the same kind of mini parade, and was always standing on the sidewalk taking pictures of those on the trucks and townspeople on the sidewalks watching below.

On their own, current high school athletes organized a balloon release just prior to the beginning of the memorial service, standing in their jerseys on the 50-yard-line and releasing shimmering purple, black and white and football-shaped balloons into the early evening sky.

Those in attendance heard songs with perfect words, “One in a Million,” and Tim McGraw’s, “Humble and Kind.”

And then, as the service concluded, the high school band played the Herder fight song as the entire crowd stood and clapped along.

High school football season starts in just a month, and there will be big ol’ hole in the 2A East. But purple hearts and MKK will be found everywhere, and the Herd’s most ardent fan will be watching from above.

One thought on "Wyo Sal: She was ‘Humble and Kind’"