Welcome to the Wyo Sal Kitchen, where the food is sometimes smokin’ hot.

I flew to the market because I had seen chocolate-covered strawberries advertised. They were obscenely expensive, so I grabbed a medium-ish sized carton of strawberries for $2.99 instead.

Preparing my Valentine’s Day feast for dinner, I selected 12 beautiful berries, tossed only a couple, and snacked on a couple more. 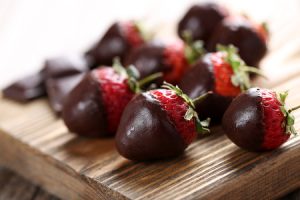 Then I scrounged the back of my baking cupboard for two dregs of bags of chocolate chips, measuring a scant 1 cup combined, tossed them in a tiny saucepan with 1 teaspoon shortening, and waited for the melting magic to happen.

I found a pretty plate, lined it with parchment paper, dunked the berries in the chocolate – and voila! – $2.99 and five minutes of work.

The guest was impressed.

So after I made the dessert and it was chilling, I started the stovetop steaks on a new grill pan that the friend had purchased. The steaks were enormous, and so I cooked the friend’s first.

But the homestead has the worst hood fan ever, and so soon – very soon – the entire house was steakhouse smokin’.

He says the steak was delicious, but the house was nearly to the call the fire department stage.

Perhaps someone 40 years ago should have considered a fan that didn’t merely pretend to suck up the smoke and redistribute it through louvers in the hood – that seems to make no sense.

Oh, and I got a handcuff bracelet from the policeman. I picked it out and gave him the idea and he is getting far too much credit from my friends, who mistakenly assumed he did the choosing.

But he got the style and the color correct with only several times of nagging, so he does deserve some credit.

Here’s to 15 more … and the leftover strawberries waiting for me in the fridge.

Next Post Microblading: What, Why…and Should YOU Do It? #giveaway »