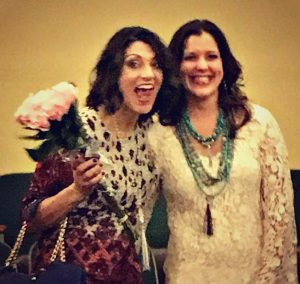 I first met this week’s Prairie Wife of the Week 7 years ago when our sons attended the same preschool. I was immediately drawn to her vibrant personality, intelligence, and tell-it like-it-is attitude. We spent most of our time together being those obnoxious women who are always laughing too loud. As our kids graduated from preschool and attended different schools, we no longer saw each other. We stayed in touch through the magic of Facebook and through it, I learned that she had been diagnosed with Breast Cancer. I knew I wanted to share her story with our readers as part of Breast Cancer Awareness month. When we spent some time together at a Breast Cancer fashion show this month, I was repeatedly reminded of what an amazing uplifting person Abby is…

I was born in Fort Collins, CO, in 1971. My dad was still in school at CSU, and my mom was working at a bank and wearing those little ’60s skirts that you can’t bend over in (that she wouldn’t be caught dead in now).  Upon graduating, Dad accepted a job teaching English at Pascoe Vale Girls High School in Melbourne, Victoria, Australia. In true hippy fashion, they serendipitously packed up their books and a few of my toys and flew across the Pacific, where we ate Thanksgiving dinner in shorts in the backyard, made lots of friends, my parents found Jesus. I earned an Aussie accent (evidence of which is found on the numerous cassette tapes of my one-sided conversations with my grandparents that my mom sent “back home”). My brother Matthew was born in Melbourne before we headed back to The States after about four years. I’ve loads of foggy but warm memories of those Australian years.

I think my folks missed family, so when we returned to Casper, Wyoming, in 1976, this is where we stayed.  My dad taught English in various Casper schools for years, while my mom “stayed home” with us. My sister, Betsy, was born when I was eight, and my second little brother, Andrew,  came along when I was ten. 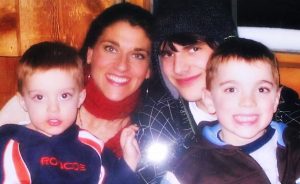 My husband Shane and I have been married since 2005 and have two sons together, Jake, 13, and Tucker, 10. I have a 25-year-old son, Peder Hilde, who joined the Navy after graduating from NCHS and is still stationed in Washington. My stepdaughter, Brooke, is preparing to graduate from NCHS this spring.  We’ve worked hard to bond our blended family, and even with its up and downs, I think we’ve done pretty well.

On a Saturday morning in November 2013, two months before my 43rd birthday, I was doing a quick self-breast exam, and I found The Lump.  It felt like the size of a pea on the right side of my left breast.  I had that lightheaded “this can’t be real” feeling, and then I did the dumbest thing–I convinced myself that it couldn’t possibly be anything worrisome. I put off my already-postponed and overdue mammogram for another six weeks.  When I finally went in early January 2014, though, I wasn’t shocked when radiology looked at my mammogram and called me to return for an ultrasound on my left breast for “further evaluation.” They discovered it was a solid mass, and within a handful of days, Dr. Lane Smothers performed a lumpectomy to biopsy the lump we’d found.  The plan was for him to call me within 48 hours with the biopsy results.

I remember standing in the grocery store two days later when Dr. Smothers called to tell me it was cancer. Officially, I was diagnosed with Invasive Ductal Carcinoma. They also discovered that my tumor was overproducing a protein called HER2, which is present in 20-30% of breast cancers, making it a slightly more aggressive variety.  We’d caught it early, he told me, and I pressed him until he finally labeled it Stage 1.  I called my husband straight away, and then we made calls to our families, who were concerned but reassuring.  We told the kids that evening, and I think because I initially seemed–and felt–unphased by the news, they didn’t worry much, though Tucker, who was seven, said to me earnestly, “Mom, if you died, my tears would be rivers in my eyes.” So sweet!

Four days later, I had surgery for a sentinel lymph node biopsy to ensure we’d gotten traces of any additional mass in my breast. It hadn’t metastasized, and everything looked good. 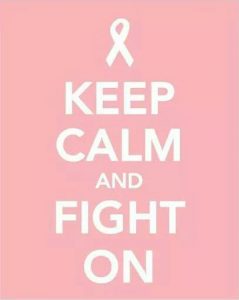 Right away, I started taking Tamoxifen orally, and I began Herceptin injections every three weeks under the supervision of Dr. Rosen, my medical oncologist at Rocky Mountain Oncology, to kill any remaining HER2-positive breast cancer cells that might still potentially have been present.  I was to begin radiation treatments, too, but he left the decision to my family and me as to whether or not I wanted to undergo chemotherapy first.  We prayed about it for about a month and considered the fact that if cancer poked its head up again in the future, my prognosis would most likely not be nearly so hopeful.  I wanted to do everything possible to keep cancer out of my life for the REST of my life, so we decided chemo was the right thing to do.  Basically, I wanted to be as sure as I could be that I’d be able to meet my future grandbabies!

I would tell every woman in the process of making their treatment decisions to boldly ask their oncology docs plenty of questions, take copious notes at every appointment, and consider all the details of your cancer and every possible treatment option.  Do what seems right for you, and ask the Lord for direction because He’ll reveal it!

I had four chemo treatments every two weeks for eight weeks.  It sapped my energy, I had some headaches, and it stopped my menstrual cycle, but I honestly didn’t struggle with terrible physical symptoms.  However, the morning after my second chemo, my hair started falling out in the sink, and I shaved my head that week.  Losing my hair was genuine trauma for me, as it is for most women in that situation.  I began having awful mood swings and the occasional crying jag, which had as much to do with the emotional toll the process took on me as it did the toxicity of the treatments.  This is also when the hot flashes started kicking in. I would feel one coming because the precursor would be this sort of low-level anxiety attack, and then, BLAM, I’d be covered in sweat.

The week after I finished chemo, I started radiation treatments, 33 of them, every weekday for about six and a half weeks, and it was much harder on my body than chemo was.  I was extremely fatigued, achy, and irritable, and I couldn’t work out for any reasonable amount of time before I became nauseated and wanted to lie down. I’ve lifted weights and worked out for years, which was a tough adjustment. 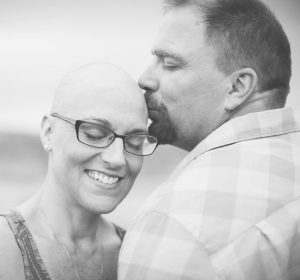 How did the treatments affect my family?  My husband is one of those people who puts his head down, leans into it, and mows forward when life is hitting hard.  That’s how he handled cancer and my treatment.  Shane’s the strongest person I’ve ever known.  He’s incredibly sensitive and aware when he wants to be, and he took amazing care of me emotionally, which is the facet in which I needed him most.

When I ask my boys and my husband what they remember most vividly from that time, they recall that that’s when they learned to step up and help out.  Our extended families lent tremendous support,  running my boys to school and sports, bringing meals, running errands, and checking on me regularly.  My mom was my Right Hand Man, beginning the day I received my diagnosis.  My husband’s work kept him extremely busy at that point, which meant that he couldn’t be at many appointments and treatments, so Mom was with me faithfully, coming to all of my doctor appointments and taking notes, and giving me constant encouragement. My husband and my mom are the two best friends I couldn’t live without! 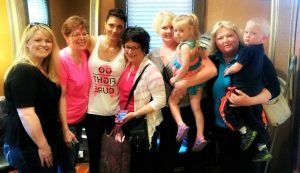 So many friends and acquaintances reached out to us in support with cards and flowers, hats and scarves, meals, and visits. At times I felt guilty and even uneasy in the face of the ruckus my situation seemed to create because I know of many people who caught their cancer at a much graver stage and went through suffering that I can’t even wrap up my brain around.  Sometimes I felt like my cancer wasn’t worthy of all of the attention!  I still struggle with that.  But I’m convinced that the Lord used that time in my life to tangibly show me that I’m loveable, that I AM worthy of being loved, not just by Him but by the people in my life.  That’s a biggie for me.

I’ve heard many cancer survivors talk about their 30th chemo or their second bone marrow transplant. . .I knew that I had treatments on the easier end of the spectrum, but the healing process was still gradual.  It took me more than a year to regain completely regain my energy.  Now I have fewer eyebrows and more grey hair, though I love the waves that have grown in with this hair I grew from scratch.  My fingernails, which I’d mostly lost, have finally grown back and stopped breaking and peeling. 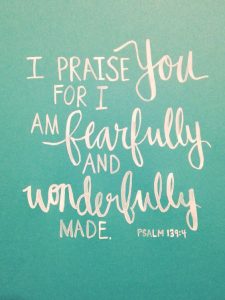 My hair fell out in May 2014 during chemo, and it didn’t start growing until September after I’d finished radiation.  My vanity took a hit because it’s an area where I needed some character growth.  I don’t mean to sound shallow because cancer is about illness, mortality, and faith. Still, it reminded me that I needed to wake up and smell the coffee in terms of realizing that Christ didn’t put me here simply to enjoy my shiny hair, pumped biceps, and cute shoes. It made me start over in asking Him what He chose for me, what He chooses for me every day.  Being diagnosed with cancer and going through all of that didn’t cause me to have what people expect–an overnight spiritual awakening–but over time, it re-awakened my awareness of the richness  Jesus has given me out of His mercy and grace.  I’ve had too many times when I’ve reached up my hand and asked Him to suck me out of the muck I’d made out of my life, but it hasn’t been too many times for Him. I owe Him my life!

Every woman needs to do her monthly self-breast exam!  Mine might’ve saved me from a really ugly later stage of cancer or worse.  I never felt confident about checking my breasts because would I know what a “lump” would feel like?  Lady friends, take it from me, if the tumor is there, you’re most likely going to feel it.  Have an annual mammogram after age 40.  According to Breastcancer.org, about 1 in 8 U.S. women (about 12%) will develop invasive breast cancer throughout their lifetime.  Don’t tell yourself it won’t happen to you, so get your cancer screenings.  It’s a beautiful truth that, with the advanced medicine and technology we have now, breast cancer doesn’t have to be a non-negotiable death sentence, especially if you find it early.

Previous Post « WyoSal: Pray Harder Than You’ve Ever Prayed Before