Prairie Wife of the Week Deva From MyLifeSuckers.com #giveaway

I first learned of Deva and her blog MyLifeSuckers.com when I found her video “Let It Go: A Mom Video Parody” on Facebook. I instantly hit her YouTube page and watched all of her videos. I then realized she had a blog and well…I have to be honest here…I formed a little bit of a mom crush on her. Don’t worry though, The Cowboy has nothing to worry about lol! Her witty writing, hilarious and clever videos, and her open honesty about the ups and down of parenting struck a chord. I mean, who can’t relate to 10 Ways I Ruined My Tweens Life Today? Here at PrairieWifeInHeels.com our mission is to offer support to other women (and their families) through humorous, honest and heartfelt blog posts about our experiences. We want to encourage others to lead their lives with grit and grace so they can discover the “Prairie Wife” within. Deva is the perfect Prairie Wife of the week because she does all of the above. Her videos have brightened millions of people’s days across the world, her parenting posts make you laugh and give you the energy to move forward and parent the best way you can, and her honesty about her personal struggles have surely offered support to many women who felt like they were alone!

Stop by the end of this post to enter a giveaway! We’ve got a $10 gift certificate to Starbucks (a nod to her Suburban Funk Video) and a signed copy of I Just Want To Be Alone a book of hilarious essays written by moms for moms! 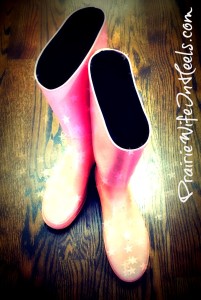 Prairie Wife (PW): First tell us a little bit about your family.

Deva (D): I live in the Bay Area with my husband, Gabe, and our two life suckers, as I affectionately call my kids.

PW: Can you share with us your pre-kid life?

D: In my pre-kids life I had abs. And perky boobs. And I slept. It was marvelous! LOL I lived in LA after college to pursue my life-long dream of being an actress. It was hard. I worked up to 7 jobs at once to support my dreams. Then I met Gabe, moved to New York City and started doing sketch comedy, which I LOVED. We got married, I got knocked up and got the perfect mom job as an editor for Nickelodeon’s parenting website. I was there for over 6 years until I left due to medical issues. Then my husband bought me a video camera and the rest is history …

PW: Like many of our readers, before you became a stay-at-home mom you were a working mom, can you talk to us about the pros and cons of both jobs? 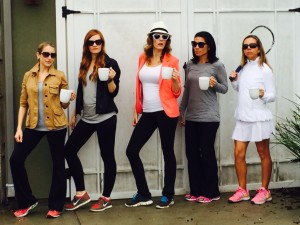 D: I was never really fully a stay-at-home mom. I started working at Nickelodeon part-time when my daughter was 7 months old, so I was kind of a hybrid. It was the perfect gig for a mom. I worked from home. And as long as I got my assignments in, I could be a faux stay-at-home mom and work during nap and after the kids were in bed but still coop at their preschools and go on play dates and be there for pickup. It was the perfect balance for me, although I’m not gonna lie, it was a little stressful at times. Or all the time.

PW: An auto immune disease called Hashimoto’s forced you to stay home. Will you educate us about this disease and its effects on you and your family?

D: I started to feel incredibly tired a few years ago. My husband kept saying it wasn’t normal and something was wrong with me, but I brushed him off saying that all moms feel like that. We don’t sleep. We don’t rest. We don’t sit down. OF COURSE we’re tired. Finally he convinced me to go to the doctor. (Because of course I never go to the doctor, I’m a mom. But if something is wrong with my kid they’re at the pediatrician in 15 minutes!). They discovered I have Hashimoto’s Thyroiditis. It’s a fairly common autoimmune disorder in which your immune system basically attacks your thyroid. Through a combination of diet, medication, supplements, exercise and knowing my limits, I’ve been able to manage it quite well. My family has been really patient and supportive. When I tell them Mommy is feeling really “Hashis” they know I need to rest.

PW: When you first started your blog MyLifeSuckers.com and decided to do a video parody called “What Does the Kid Say?” did you have any idea how HUGE it would be? 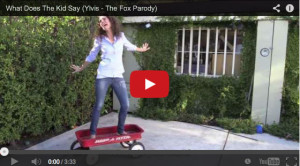 D: I had NO IDEA how huge it would be. We made the video for fun as a family and it was a last-minute decision to pop it on YouTube. I created the blog as a landing page for the video. I was stunned when it went viral. It was intense and amazing and honestly a little terrifying. But I feel so blessed and lucky now. I’m really living my childhood dream of getting to act and create. And it’s all on my own terms. No Hollywood casting director is standing between me and my dreams now.

PW: Was it harder to create your second video “Let It Go-A Mom Parody” after the success of the first video? 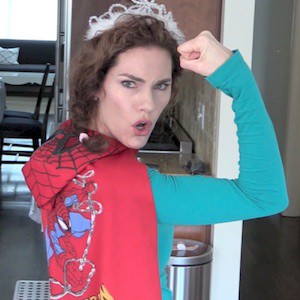 D: It was a little scary to put it out after the success of the first one. But then I told myself, “What’s the worst that can happen? People won’t like it? They won’t watch it?” I’ve been through worse in my life. So I put it out and hoped for the best. When that one went viral, I was equally stunned. The response to that video was so overwhelming and incredible. Moms were calling it their “anthem” and emailing me the most beautiful letters about how I helped them laugh at their crazy, difficult lives. Those comments are the reason I keep going.

Every video is scary to put out. I never know what the response is going to be. So far it’s been positive for the most part, so I feel lucky.

PW: Let’s talk numbers. How many days does it take you to create a video, how much time goes into the editing, writing, and directing, and how many people are knocking on your door trying to be in the next video?

D: Holy moly! They take an enormous amount of time. Probably 100 hours or so? The writing is fast, then comes the song recording which takes me a while because I’m not exactly Celine Dion and it can take me time to get a decent recording. The shoots are usually a day. We just get what we get and then I edit the gems together. The editing takes a long time. Days. I’m a perfectionist so I spend a lot of time making sure the clips are all exactly what I want.
There is a long queue of people who want to be in the videos, but I’m slowly fitting everyone it. I donated parts in the videos to the two local school districts, and I’m happy to say they raised quite a lot of money for the schools. I didn’t realize people wanted to be in them THAT badly, LOL.

PW: Any advice for anyone that wants to create their own video parody?

D: Go for it! Don’t be afraid of making a fool of yourself, that’s half the fun. And don’t let something like a less-than-perfect singing voice hold you back!

And record the song first and lip-sync it. You don’t want to be singing live and trying to dance and act it all out.

PW: Putting yourself out there for the world to see can be scary. Have you had any negativity? How have you dealt with it? 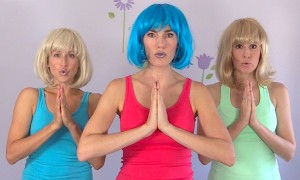 D: Ummmm … YES! Tons of it. My What Does the Kid Say video got posted on Reddit Cringe and I was flooded with horrible comments from teenage boys. It was terrifying. I even had to go to the police due to some threats. But it definitely gave me a thick skin, and now I just laugh at the nasty comments. Some lady recently said she hated my facial expressions and wanted to punch me repeatedly in the face. Niiiiiiice. I think sometimes people forget there is an actual person on the other side of that computer. I deal with the negative comments by laughing at them and ignoring the haters. I never feed the trolls. Ever.

PW: How has your family felt about your work going viral?

D: We were recently on vacation and got recognized a bunch of times, and I think that was the first time it hit home for us that people are really watching and that those numbers on YouTube mean real-life eyeballs. My kids enjoyed it and love hearing people say they like the videos. They love making them, so to know they’re appreciated means a lot. Especially to my daughter. My husband is really supportive of me and my work, but he finds the whole “getting recognized” thing a little disconcerting. We’re adjusting, I’d say. And I’m just so grateful that anyone watches my videos, so I feel incredibly lucky. Every comment, every view, every like means the world to me. And honestly, I love when people come up to me in public and say they like the videos. I mean, how incredibly cool is that?

PW: What are your plans for the next year?

D: I’m just going to keep on keeping on. I’m trying to write a book. Which is like giving birth, except harder. And I’ll make more videos, of course!

D: Follow your dreams, mamas! You’re never too old, too sick, too tired or too busy to do a little something towards making your dreams come true.

We’ve got a $10 gift certificate to Starbucks (a nod to her Suburban Funk Video) and a signed copy of I Just Want To Be Alone a book of hilarious essays written by moms for moms to giveaway! All you HAVE to do is leave a comment. Earn extra points towards the giveaway by following us on social media. Please be honest, we WILL check!

43 thoughts on "Prairie Wife of the Week Deva From MyLifeSuckers.com #giveaway"