We had been dating less than a year when The Cowboy offered to take me on a January elk hunt with him. I had heard him talking non-stop about the wonders of elk hunting; days spent on horseback enjoying the majesty of nature, the thrill of the hunt and kill, and the amazing time we could spend together snuggling in front of the fire (that was my addition to the adventure not his). I was also a young woman eager to show that I was just as tough as my boyfriend, and that I could not only survive the winter wilds of Wyoming but thrive in them as well!
Cue January. The Cowboy picked me up in Laramie where I was attending college and we headed up to Cody where my future SisterInLaw1 lived with her husband. I spent some time with SisterInLaw1 and her daughter as the men packed up the wall tent and stove (an apparent luxury) and all the other things we would need for our week in the mountains. I innocently played with SisterInLaw1’s sweet toddler daughter and listened to her share her stories of Elk hunting. She is a true Prairie Wife and has killed a bigger bull elk then most men I know, not to mention she is seriously one tough cookie. In retrospect I am sure it was all she could do to hold her laughter in, at this stupidly optimistic eastern college girl, who was so excited to go on a January elk hunt. 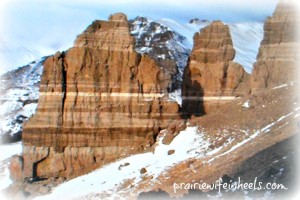 We headed up to Picket Creek located in the Graybull River area outside of Meeteesee, Wyoming and made camp in a somewhat wooded   area. We got the tent and stove set up, and the horses out of the trailer to stretch their legs. I really didn’t help too much, other than to keep the horse I had named “Kipper” company. He was like a dog following me around and asking for love, and I was instantly at ease with him. We headed out for a short ride that afternoon and I felt a little uneasy, it was after all only my third time on a horse! After a nourishing dinner of chili we settled down in the tent for the night. I had a sleeping bag that was rated for 0 below and I still found that the only way to stay warm was to sleep in all my clothes and a thick knit hat. The stove kept it to a balmy 32 degrees in the tent, and my dreams of snuggling by the fire were soon overridden by my survival instinct.
Soon The Cowboy was prodding me awake. I have never been a morning person and I was especially tired after a cold and not so comfy sleep on the ground. I stumbled out and stiffly got onto my horse and we headed out. I noticed that it was still really dark…as in all I could see was the moonlight reflecting off The Cowboy’s hunting vest. I asked him what time it was and he mumbled something like 4:30. I can’t be sure what he said, because my ears were so frozen that my eardrums were no longer able to vibrate.
The group split up and The Cowboy and I headed to a secluded spot on the side of a mountain. There were only a few inches of snow on the 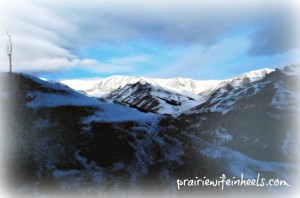 trail but nothing too deep. We dismounted in a gathering of pine trees overlooking a large valley and sat down. As the pale winter sun began to creep over the horizon my face slowly unthawed and I asked The Cowboy for something to eat. He obligingly handed me a frozen Snickers bar and motioned for me to keep quiet. Two hours later, he finally looked at me and explained that it looked like the Elk weren’t coming to that spot, and we could head back to camp for breakfast…I had no response and simply hopped up on my horse and followed him back to camp. We took a small nap in the afternoon and headed out at dusk to do the same thing, find a spot and sit, hoping that an elk might come by.
By the evening of day three, this future Prairie Wife was cold tired and more than a little grouchy and snappy. It was bitterly cold at almost 10,000 feet and it had snowed several times, making it wet and windy. As I went outside for my last bathroom break for the night I found myself thinking that perhaps I wasn’t quite the tough mountain woman that I had previously thought. Both my hands holding the flashlight were shaking in the cold, and I was just about ready to head back into the tent when I heard muffled footsteps behind me, slowly approaching. My heart jumped and the steamy puffs of air coming from my mouth resembled that of a steam engine heading up a steep hill. I had visions of the newspaper article… “A young city girl up for a winter elk hunt was brutally mauled by a bear. She was found half naked and frozen by her boyfriend. Her left hand still remains missing.”
I slowly reached down to pull up my underwear, long johns, jeans, and snow pants trying to decide if it was even worth the time, or if I should just make a run for it. I heard the snort seconds before I felt the warm breath on the back of my neck. I jumped up and turned around trying not to stumble as I pulled up my clothes and prepared to run, a scream stuck in my frigid throat (caused by a combination of fear and freezing temperatures). As my eyes adjusted and I steadied the flashlight beam I saw a large looming shape, dark brown and slightly dusted in snow…it let out a quiet neigh and I immediately started to breathe again. Apparently “Kipper” the horse had been feeling lonely and thought I might want some company. I stumbled back to the tent and after gently pushing him out as he tried to follow me in, I zipped myself into my sleeping bag and tried to get some rest, hoping the next day we could get an elk and get home!
The next day the guys (did I forget to say I was the only estrogen producing person along on the hunt) decided to try a new area and we set 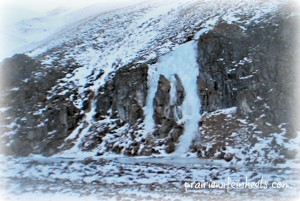 out on the horses. We rode the horses up a shale and ice covered mountainside, getting down and leading them as we approached a deep valley with a creek running through the bottom. As I slipped and slid down the valley I mentally cursed The Cowboy. Suddenly I heard a strange rushing noise behind me, I turned to see my horse sliding on her butt, front legs extended, and eyes rolling so I could see the whites, headed directly for me. In what can only be described as an instinctual ninja move, I dove to the right and tucked and rolled. The mare slid past me and landed butt first into the creek. She stood up, shook herself off and looked at me as if to say “are you done proving your point yet?”
As we rode back to camp later that day from my first elk hunt, the horses, excited by the prospect of grain and a rest, started to run. The Cowboy rode alongside me whooping and laughing, in my fear and exhaustion I let loose with a torrent of bad language, rage, and tears. I thought that his exuberance is what had sent the horses running, and at this point it was all I could do to keep my saddle weary body from falling off and into the snow. How dare he put me in danger after all I had been through!? He grabbed my horse’s reins and pulled me to an abrupt stop. He then not so calmly stated that he had enough of my bad attitude ruining his elk hunt, that I had wanted to come along, and it wasn’t his fault that it wasn’t the big fun adventure I had thought it would be. The Cowboy explained that we would be heading home the next day and that next time I was invited I better think a little more before accepting the invitation. I hung my head and kept out of the way for the rest of the day. Over time the wounds (both physical and emotional) healed. I have been on other hunts with The Cowboy (and have the scars to prove it) but, never again have I agreed to go on a winter hunt. Now days I let The Cowboy have his fun while I stay home warm, cozy and dry. Ready to greet The Cowboy with a smile, and a batch of steaming Elk stew when he returns. Note: All the photos are actually from my first elk hunt (doesn’t it look cold)

2 thoughts on "My First Elk Hunt"

Previous Post « Baby Pro All in One Baby Food Maker

Next Post YOU PICK Prairie Wife of the Week February 2014 »