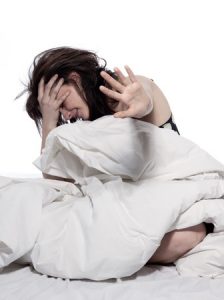 I’m not a morning person.

Yesterday, per usual, The Cowboy woke up and showered while I lazily stayed in bed. Cowboy J’s alarm went off at the same time The Cowboy was beginning to get dressed when suddenly, I heard a horn honking.

For many of you that may be usual but, out here on the prairie, it’s really not the norm. The Cowboy went to the front window to see what was going on while I continued to be lazy…until I heard him yell…

He ran into the room finished throwing on some clothes and rushed out the door. I jumped out of bed, threw on sweats and a hoodie, and ran into the hallway….to see Cowboy J literally running in circles in his PJs. I hollered at him to go help his dad, only to yell again at him to get on a jacket and boots. He was so panicked that he was headed outside barefoot and in no shirt. Mental note: He might not be the best in a crisis. I screamed downstairs to wake up the other big kids and told them to stay inside with the littlest Cowkids. I ran into the garage and grabbed the fire extinguisher we keep in there. I ran across the property, headed for the pig pen.

Two strange trucks were parked on the grass and white smoke was boiling out of the pigpen. I was mentally patting myself on the back for grabbing the fire extinguisher until I got closer to the pen and saw a man spraying the hay down with our hose (the one we use to water the horses and pigs). Guess I wasn’t so great in a crisis either lol.

The first thing I asked was if the pigs were alive. I couldn’t see The Cowboy through the smoke but heard his voice emerge from the pen that they were fine. Bacon and Blue Butt chose that moment to snort and squeal so I knew that he wasn’t just humoring me. The four of us proceeded to douse the pen with water, remove all the large wooden objects and hay bales we could reach, and get the fire and smoke calmed down enough so we could get the pigs out. 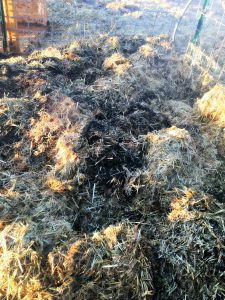 Soon things were under control, and we were able to talk as we continued to take the smoldering hay out of the pen and spread it around so we could douse it with water. I think you can understand why I have no pictures of the actual fire…I was too busy working. But, this is the hay burned and still smoldering. I spent the morning keeping it wet and stirring it up to make sure there were no hidden hot spots.

Lucky for us these men had been driving by on the highway when they saw the smoke. They pulled over to make sure all was well (in true Wyoming fashion) and when it was obvious it was not, they took steps to not only wake us up but, to begin fighting the fire.

I cannot express how thankful I am.

Thankful that it has been wet and rainy all week.

Thankful the fire didn’t start in the middle of the night.

Thankful these men took the time to stop and help. 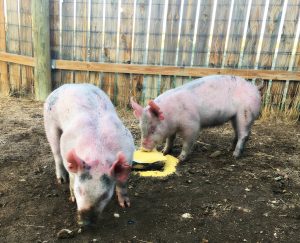 Thankful our pigs were OK.

Thankful the fire didn’t spread to our huge stack of hay, the horse corral, our shop, or the skidster…all were a mere foot or two away from the fire.

We moved Bacon and Blue Butt into the chicken yard for the day. They have a small cough from smoke inhalation and were a bit ashy but, otherwise fine.

As far as we can guess they were chewing on the electric chord to their heat lamp and started the fire. At first, we thought the heat lamp was somehow too close to the hay. After further investigation, it was an electrical fire not one started by heat.

The Cowboy and Cowkids set up a new and improved pig pen that no longer has anything that will turn the pigs into bacon before their time. You can see the fire damage on the poles but it is merely on the surface and not structural. 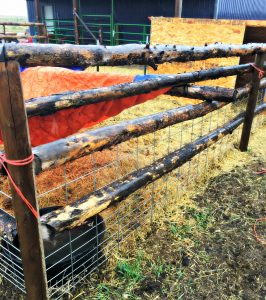 Those of you that are NOT morning people, I can assure you, nothing gets you up and going like a fire alarm…

Next Post Charcoal Beauty Dos and One BIG Don’t! »